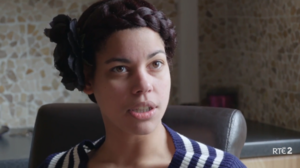 Further to last week’s documentary fronted by actor John Connors, I Am Traveller…

Following a number of Irish immigrants, I Am Immigrant documents the daily challenges, as they see them, through their eyes.

Ricardo, a member of the marginalised Roma community who is on a quest to become a member of an Garda Síochána; Elham, a young Muslim woman who was physically assaulted on public transport for wearing a hijab and Nigerian-born, Tallaght-raised Boni Odoemene who is running in the hope of becoming the first black Student Union President.

The documentary also follows Peter O’Loughlin, founder of Identity Ireland and Chaiman of Pegida, as he tells of his motivation for stricter border controls and captures the moment when he is assaulted on his way to launch the Irish branch of Pegida outside the GPO.

16 thoughts on “‘I Used To Fantasise About Being White’”