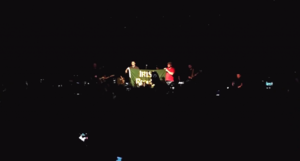 “There’s been a lot done to discredit the leaders of 1916 and the Rising in recent months and I think that that’s because the establishment are afraid of another rebellion.

Actor and Traveller John Connors speaking at Damien Dempsey’s gig in Vicar Street, Dublin, on Sunday night, before he read out excerpts of the Proclamation.

All The Decent Heads Are Leaving

22 thoughts on “The Proclaimers”