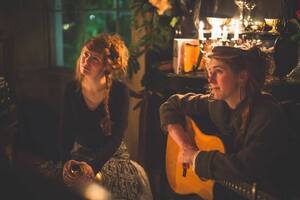 1. Julie and Branwen are Twin-Headed Wolf, a pair of twin sisters from Lahinch, Co. Clare, specialising in wonky, playful folk, making heavy use of the pair’s way with vocal harmonies.

2. Having spent the last few years perfecting their offbeat, ethereal take on the folk oeuvre with an array of non-traditional instrumentation and charismatic live presence, the duo serves us a curveball with an acapella album of folk standards that functions as prelude to their upcoming debut LP proper: The Long Decay.

3. The record is named for its recording in the Emmanuel Vigeland Mausoleum in Oslo, back in January, a tomb/acoustic chamber with up to 14 seconds of echo.

4. With the record released in February and launched in Dublin’s Unitarian Church, the pair turn their live attention to Cork Community Print Shop, with a live engagement in the non-profit arts space on Friday, April 8th.

Verdict: Gleeful, joyfully demented folk antics with a bold experimental streak. Their impending debut LP of originals ought to be a treat.