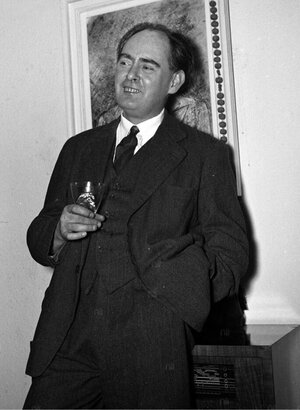 Ireland loves, or pretends to love, its literary heroes, so much so that we put quotations from Ulysses on little brass plaques and nail them to the pavements for tourists and Dubliners alike to tread on, give to a gunboat the name of that most peace-loving Irishman, Samuel Beckett, while Oscar Wilde is represented by a hideous statue indecently asprawl on a rock behind railings opposite his birthplace.

What the reaction would be of Flann O’Brien, Myles na Gopaleen, Cruiskeen Lawn (Irish for “the full glass”) or Brian O’Nolan – his real name, more or less – to the gushing lip-service we pay these days to our dead writers (he died 50 years ago on 1 April) can be easily guessed: a sardonic shrug, and a turning back to the bar to order another ball of malt.

My Hero By John Banville (Guardian)

Extract from The Third Policeman 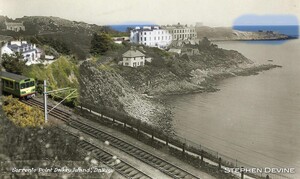 A picture I created by merging a photo of Sorrento Terrace [Dalkey, county Dublin] from 1910 and one from yesterday.

17 thoughts on “At Swim Two Worlds”