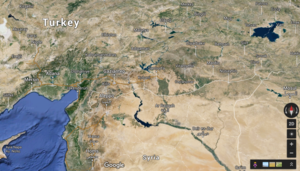 Readers may recall how, last week, Amnesty International reported that, just hours after the EU-Turkey deal on Friday, March 18, Turkey forcibly returned around 30 Afghan asylum seekers to Afghanistan – without giving them the opportunity to seek asylum.

Ireland is contributing €22million to the €3billion EU-Turkey deal.

Further to this, Amnesty reports today…

New research carried out by the organisation [Amnesty International] in Turkey’s southern border provinces suggests that Turkish authorities have been rounding up and expelling groups of around 100 Syrian men, women and children to Syria on a near-daily basis since mid-January.

Over three days last week, Amnesty International researchers gathered multiple testimonies of large-scale returns from Hatay province, confirming a practice that is an open secret in the region.

All forced returns to Syria are illegal under Turkish, EU and international law.

“In their desperation to seal their borders, EU leaders have wilfully ignored the simplest of facts: Turkey is not a safe country for Syrian refugees and is getting less safe by the day,” said John Dalhuisen, Amnesty International’s Director for Europe and Central Asia.

“The large-scale returns of Syrian refugees we have documented highlight the fatal flaws in the EU-Turkey deal. It is a deal that can only be implemented with the hardest of hearts and a blithe disregard for international law.”

The EU-Turkey deal paves the way for the immediate return to Turkey of Syrian refugees arriving on the Greek islands, on the grounds that it is safe country of asylum. EU officials have expressed the hope that returns could start as of Monday 4 April.

The EU’s extended courting of Turkey that preceded the deal has already had disastrous knock-on effects on Turkey’s own policies towards Syrian refugees.

“Far from pressuring Turkey to improve the protection it offers Syrian refugees, the EU is in fact incentivizing the opposite,” said John Dalhuisen.

“It seems highly likely that Turkey has returned several thousand refugees to Syria in the last seven to nine weeks. If the agreement proceeds as planned, there is a very real risk that some of those the EU sends back to Turkey will suffer the same fate.”

One of the cases uncovered by Amnesty International is of three young children forced back into Syria without their parents; another is of the forced return of an eight-month pregnant woman.

Saturday Night In The Suburbs

1 thought on “Return To Sender”