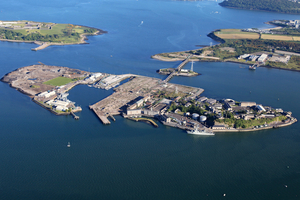 What do Cork Harbour’s industrial policy and a South Wales steelworks have in common?

The big political issue of the moment in Wales, indeed in the UK, is the imminent closure of its steel industry. The largest plant at Port Talbot employs four thousand people. There is an obvious social cost to these employees if the plant were to close suddenly.

There is also a horrible irony in seeing the country that invented the Industrial Age soon being without one of its core components.

As a Green I have some ambivalence about this situation. Steel manufacturing is far from the cleanest of industries. However every economy needs a strong manufacturing base. Green technology depends on high quality steel for everything from wind turbines to electric cars.

Port Talbot itself bears all the marks of being the industrial sacrifice area of Wales. It is as if the valleys have been kept clear so as to squeeze the country’s quota of pipes and plumes into this small piece of the Welsh coast.

Industrial policy in Ireland once saw Cork Harbour being promoted in a similar way.

Up until the 1990s the main employers were the NET/IFI fertiliser plant at Marino Point, and the Irish Steel plant on Haulbowline island.

A number of pharmaceutical plants opened during the 1970s attracted by a blind eye approach to environmental standards. Those standards did improve but the biggest pollution was still being done by the state owned and managed facilities.

It was simple brutal economics that did it for IFI and Irish Steel in the end. Sourcing materials and expanding markets proved impossible to secure.

IFI was wound down. Irish Steel endured an agonisingly slow death, being sold to an Indian asset stripper who scampered away when the five year subsidy period finished.

The legacy has been two horribly contaminated sites, Haulbowline being by far the worst. In the last two general elections both Michéal Martin and Simon Coveney produced greenprints showing what could be done with Haulbowline.

Neither has progressed any of the plans contained in those documents.

The person who has done most for Haulbowline has been John Gormley, who as the Green Minister for the Environment oversaw more hazardous materials being removed from the island, and more monitoring information being made public, than any time before or since.

I fear something similar may happen to Port Talbot. Buying time whilst kicking to touch is a certain recipe for a slew of unresolved social, economic but particularly environmental problems lingering in the region.

The filling the space responses of traditional political parties here come across as implied silent prayers – please Lord gets us over the election so we can spend the next five years not having to address this.

I’m only waiting for some politician/political party to provide a colourful brochure depicting a future Port Talbot with luxury hotel in place of the blast furnace, and a marina capable of berthing hundreds of yachts.

That’ll work. Ireland and Wales are more alike than I had realised.

Dan Boyle is a former Green Party TD (and senator) and currently working with the Wales Green Party. Follow Dan on Twitter: @sendboyle

14 thoughts on “Steeling Themselves”