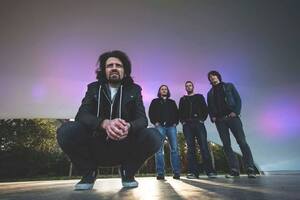 2. Last year celebrating ten years under their current moniker, the lads’ history extends all the way back to their secondary school days in the early ’90s, with the same core line-up remaining intact over the course of several bands over nearly 20 years. Eagle-eyed observers may remember them as The New Messiahs, among other names.

3. This year will see the release of fourth album Demons, and the completion of a documentary on their life and times both as a band, and as a group of lifelong friends.

4. Streaming above is Bad Code, a single taken from the upcoming album released back in November to coincide with their tenth-anniversary gig.

5. Next Friday, the band takes a rare sojourn to Waterford, where they play The Thirsty Scholar as part of the venue’s Voodoo Sessions. Kickoff at 9pm, support from The Smoking Giants.

Verdict: A furious, focused outfit that channels a wide range of influences, themes, and emotions into their music, and a formidable live proposition with a stage presence honed over the better part of two decades together.