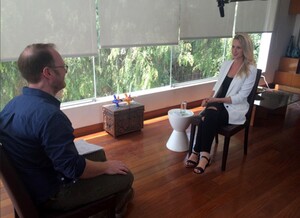 In the phoney war on drugs what is the purpose of creating  “monsters” like Michaella McCollum?

By now every Irish person should know that Michaella McCollum is a criminal, a liar and a bad hair stylist, right? That’s pretty much the message that the media, in particular the tabloid press, has conveyed for the last week.

Michaella McCollum got caught trying to smuggle cocaine from Latin America to Europe in 2013. She spent two years in a prison in Peru and just got out but must remain there for the time being, before she is eventually allowed to come back here.

Her demonisation in the media is interesting. It is indeed remarkable that all of the island’s investigative journalism resources seem to have been mobilised to find the latest minute detail about Michaella’s past.

Did she really leave Belfast because of sectarian problems? Was she drunk or stone or a bit of both or none when she boarded the plane from Spain to Latin America? Did she go to Spain because she is just a party girl or for some other reason?

All this aggressive questioning by the media is quite ironic. Remember, Ireland is the only country in the world (to my knowledge) that explicitly brands itself with reference to a commercial drug. That’s right, and Ministers are very proud to associate themselves with that drug to promote tourism to Ireland and the country’s overseas image.

That drug is Guinness. Those unfamiliar with drugs will start complaining that Guinness is not a drug, because it’s just a stout. But alcohol is a drug, and it’s a much bigger killer than all the cocaine carried globally by mules like Michaella.

And the same goes for tobacco. Together, alcohol and tobacco kill about 8 million people worldwide every year—and all illegal drugs (like cocaine, heroin, etc.) kill 200,000.

There’s therefore no debate as to which are the killer drugs. So when are we going to see journalists attack tobacco and alcohol executives in the way they attack Michaella?

Michaella tried to smuggle cocaine across the Atlantic. Does that make her a criminal? Under the ridiculous regime of drug prohibition under which we live, yes. But if drugs were decriminalised, she’d be cheered as a canny business woman.

It’s worth asking why drugs like tobacco and alcohol are legal but drugs like heroin, marijuana and cocaine are illegal. There’s an important article  that came out only a few days ago which says it pretty bluntly.

It features an interview with John Ehrlichman, who was US President Richard Nixon’s domestic-policy adviser. Nixon is the president who launched the “War on Drugs” in the late 1960s and that has been with us since then under different tactics.

Ehrlichman said that the war on drugs was just a mechanism for social control, used to criminalise minorities or any group that those in power wish to control more easily.

In Nixon’s time it was blacks and the antiwar left:

“You want to know what this was really all about? The Nixon campaign in 1968, and the Nixon White House after that, had two enemies: the antiwar left and black people. You understand what I’m saying?

We knew we couldn’t make it illegal to be either against the war or black, but by getting the public to associate the hippies with marijuana and blacks with heroin, and then criminalizing both heavily, we could disrupt those communities.

We could arrest their leaders, raid their homes, break up their meetings, and vilify them night after night on the evening news. Did we know we were lying about the drugs? Of course we did.”

What is the effect of creating “criminals” and “monsters” like Michaella? The effect is that the public focuses laser-like on those individuals but doesn’t hear news about other crimes.

For example, it was reported  last week that the shortage of hospital beds in Ireland translates into 300 avoidable deaths per year—that’s 3,000 over the last 10 years.

But that wasn’t covered extensively at all by the media. So who should be blamed for those deaths? The Minister for Health? Some bureaucrats?

Unfortunately, the details are lacking. Why? Because our journalists are so busy researching whether Michaella dyed her hair blond or bleached it? And what is her REAL favorite hairstyle? And does that contradict what she said three years ago when hanging out at her local pub? And actually, what pub was it, EXACTLY?

In short, the media has gone all-out on Michaella McCollum calling her a “criminal”, however that only holds if one believes that the drug prohibition regime is legitimate.

But the fact is that it has been a total failure for decades and just about every example of decriminalisation that we have (for example, in Portugal) has proven to be rather successful. By creating monsters, the media diverts attention from the real problems.

Sure, crimes have a place in reporting, and we could criticise Michaella for making bad decisions etc. But isn’t it interesting how some crimes of ordinary people receive so much more aggressive and negative reporting than other crimes, like letting people die in hospitals?