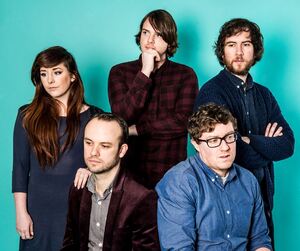 1. Dublin pop five-piece Land Lovers continue paying homage to the guitar pop of the ’50s and ’60s with upcoming third long-player The Rooks Have Returned.

2. Already firmly established as lynchpins of the city’s lo-fi/pop community, the band have also co-founded the Popical Island label and annual all-day gig, as well as circumnavigating the Irish festival scene and supporting Stephen Malkmus and the Jicks, among others.

3. Streaming above is Angeline, the first single from the album, releasing May 13 via Popical Island.

4. The band launches the album at the Workman’s Club [Wellington Quay, Dublin 2] in Dublin on May 21, with Dinah Brand and Field Trip in support. Kickoff 8pm, €10 in or €15 including a copy of the new record.