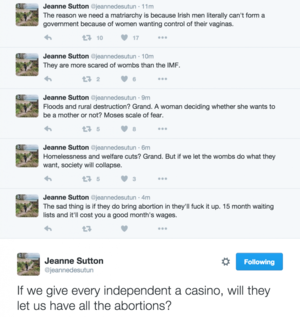 I won’t sign up to any Programme for Government that doesn’t address a referendum on the 8th Amendment #repealthe8th https://t.co/bEcJyzTWX9

Thank you @KZapponeTD Can you remind male ind’s that Constitution is People’s document – not theirs? #repealthe8th https://t.co/xq94wXMSSK

Further to this morning’s reports that seven of the 15 Independents, who were in coalition talks with Fine Gael, are “opposed outright to any constitutional change regarding abortion, while a number of others have serious reservations”.

The Irish Independent reports Fine Gael told Independents it wants to establish “a citizens’ assembly, without the participation of politicians” which would, in turn, make recommendations to the Dáil about the Eighth Amendment.

Seán Of The Bread