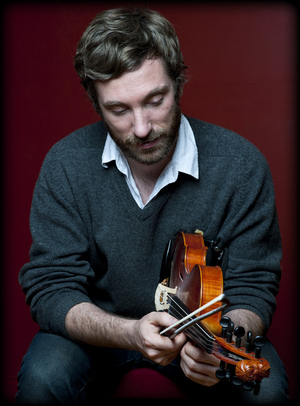 1. Plying his craft on a 10-string violin known as the hardanger d’amore, Caoimhín treads the world’s stages as part of a variety of duos, as well as with trad outfits The Gloaming and This Is How We Fly.

2. Among these stages have been the Sydney Opera House, London’s Royal Albert Hall, and the Lincoln Centre in New York..

3. O’Raghallaigh recently became the artist-in-residence at the National Concert Hall, Dublin and will be working with collaborators on monthly live shows ’til June. All the info here.

4. Among a spate of upcoming gigs with The Gloaming and his NCH residency are a smattering of once-offs, including a May 14 show in Visual Carlow with Iarla O’ Lionáird, and a solo show on May 23 at Cobh’s Sirius Arts Centre.

Verdict: A unique instrument with rich, droning tones is Caoimhín’s tool of trade, and his mastery of it is testament to a true artistic calling, as he, among others including his The Gloaming bandmates and contemporaries, write a new chapter in trad’s history.