You may recall the sale of Nama’s Northern Ireland’s property portfolio, Project Eagle, to US private equity firm, Cerberus Capital.

And how the sale is now the subject of investigation by the National Crime Agency in the UK and the Securities and Exchange Commission in the US, among others.

Cerberus Capital Management LP and CarVal Investors LLC are among funds circling two portfolios with a combined par value of €4.7 billion euros being sold by Ireland’s so-called bad bank, according to two people with knowledge of the matter.

Lone Star Funds is also interested in the loans held by the National Asset Management Agency, according to the people, who asked not to be identified because the process is ongoing.

The portfolios, known as Project Ruby and Emerald, will probably be sold at a discount to their original value by the agency, known as NAMA. First-round bids are due [tomorrow].

Readers may wish to note that the Sunday Times, under the Freedom of Information Act, obtained the diary of Ronnie Hanna – Nama’s head of asset recovery at the time of the sale of Project Eagle.

It shows Mr Hanna met with Cerberus chairman John Snow for an hour on March 31, 2014 – the day before the US fund was due to bid to buy Project Eagle. 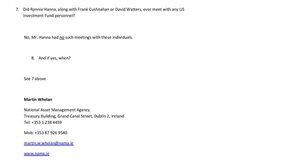