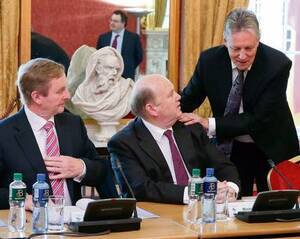 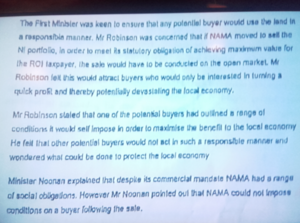 From top: Taoiseach Enda Kenny, Michael Noonan and Northern Ireland First Minister Peter Robinson; Minutes of a meeting between Mr Robinson and Mr Noonan in which they discuss the sale of Northern Ireland’s Nama portfolio; and a clip of a secretly recorded meeting involving Frank Cushnahan – both on BBC Northern Ireland’s Spotlight last night

You may recall how Independent TD Mick Wallace, on several occasions in the Dáil last year, raised concerns about the sale of Nama’s Northern Ireland property portfolio, Project Eagle, in 2014.

On the first occasion, in July 2015, his microphone was turned off.

On another, in October 2015, after making yet another call for a Commission of Investigation into the Project Eagle sale, Mr Wallace told Taoiseach Enda Kenny:

“The Irish people have not been served well by Nama. It stinks to high heaven and you are involved in the cover-up because you refuse to do anything about it.”

Ms McAuley first explained how former banker Frank Cushnahan is an “incredibly well-connected” Belfast businessman who, nine years ago, left his position as an advisor to the Northern Ireland Housing Executive to become chairman of east Belfast firm Red Sky – a company that worked for the Housing Executive.

She explained that Mr Cushnahan convinced the Housing Executive to forgive most of Red Sky’s debts so that its debts went from £250,000 to £20,000.

His behaviour was later criticised by a Stormont investigation which found his actions to be “totally unethical and could and should have been avoided”.

Two years later, in 2009, £4.5billion of Nama’s debt was owed by developers in Northern Ireland and politicians feared there would be a fire sale of property, prompting property rises to drop – a fear Northern Ireland’s Finance Minister Sammy Wilson told BBC’s Spotlight in 2011.

And who did Sammy Wilson choose to sit on that committee?

Frank Cushnahan – who, Ms McAuley reported, held clinics for developers in Nama, where he would tell developers “how to survive” Nama.

Ms McAuley reported that, at this time in Northern Ireland, more than £4billion in debt was owed by just 55 debtors – the vast bulk of which belonged to a handful of people.

For property developers, their buildings were worth just a fraction of what they owed and they were at risk of losing their own personal homes as their loans were secured via personal guarantees.

It was Nama’s policy to enforce personal guarantees and they couldn’t sell discounted assets back to defaulting developers as it was Nama’s legal responsibility to get the best possible return for Irish taxpayers.

In April 2013, Ms McAuley reported, Nama contacted the family owners of the Ramada Hotel in Portrush, to call in their loans which were worth £48million. The family were given 24 hours. At the time, the hotel was worth less than £3million.

The behaviour of Nama prompted Sammy Wilson to call Nama’s chairman Frank Daly the next day.

“That was my worry, that we were going to start feeling the hard end of Nama’s actions on some businesses in Northern Ireland and there were going to be political consequences.”

Ms McAuley reported that, following the action taken against the Ramada Hotel, developers and politicians in Northern Ireland became nervous.

Then, just a few weeks later, in May 2013, “out of nowhere”, American firm PIMCO – the world’s largest bond fund manager – wanted to buy “Nama out of Northern Ireland”.

Representatives from PIMCO travelled to Stormont in Belfast and met the then first minister of Northern Ireland, Peter Robinson and Sammy Wilson. Frank Cushnahan was also at the meeting, as was Ian Coulter, then managing partner in Tughans law firm.

Although Mr Cushnahan set up the meeting, it’s claimed the Northern Ireland Nama advisor didn’t inform Nama in Dublin about the meeting.

In reference to this, Shane Ross told Ms McAuley:

“It’s odd they didn’t know, yeah, but it also tells you something about the thinking of people who arranged these meetings, that the only way to get things done is to get politicians on the job.”

But it wasn’t the first time Mr Cushnahan had set up a meeting without Nama’s knowledge.

Ms McAuley reported that, at the end of April 2013, just weeks before representatives of PIMCO were introduced to Peter Robinson, Frank Cushnahan and Ian Coulter had worked with the law firm Brown Rudnick in London to speak to several investment houses. Mr Cushnahan didn’t disclose those meetings to Nama either.

Mr Cushnahan has denied he arranged the meeting between Mr Robinson and PIMCO but Mr Robinson told the finance committee in Stormont that it was set up by Mr Cushnahan and Mr Coulter.

Meanwhile, Mr Wilson wrote to Finance Minister Michael Noonan about PIMCO’s proposal. Ms McAuley explained that PIMCO wanted a “private, closed market sale” – contrary to Nama’s remit which is to get the best return for the Irish taxpayer by getting the best price for an asset on the open market.

In December 2015, Mr Wilson, who was appearing before the finance committee in Stormont, recalled the letter and downplayed its significance, saying:

Ms McAuley reported that Minister Noonan then sent the proposal on to Nama. She said:

“Nama had never considered a sale this big before but the agency was obviously interested. By September 2013, Nama had started talking directly to PIMCO.“

Also in September 2013, Peter Robinson, for the first time and in an apparent U-turn, publically advocated the sale of Nama’s Northern Ireland portfolio in one go.

Following this, at a meeting in Tughan’s law firm in Belfast – in which Frank Cushnahan had an office – Nama’s Frank Daly announced to Mr Cushnahan, and the rest of the committee, that PIMCO wanted to buy the Northern Ireland portfolio for more than one billion pounds.

This was despite Mr Cushnahan having set up the original meeting with PIMCO in the first place.

“It had been five months since Mr Cushnahan had met PIMCO and he hadn’t said a word.”

Brian Rowntree was also a member of Nama’s Northern Ireland Advisory Committee and he attended that meeting. He told Ms McAuley that Mr Cushnahan did not disclose his prior involvement with PIMCO.

This meeting was Mr Cushnahan’s last as an advisor to Nama as he resigned soon after due to “family priorities”.

This meeting, in September 2013, took place on the same day Mr Noonan had lunch with Ian Coulter.

Mr Robinson was later asked, in October 2015 in Stormont, if he discussed PIMCO with Minister Noonan during that meeting.

“I don’t know whether PIMCO as such. The discussion may well have dealt with the issue of whether it was possible to do, from Nama, to come to terms with a single bidder.”

However, PIMCO’s bid was discussed.

“This was a big request, the Irish Government was committed to competitive sales on the open market because they believed that that was the way to get the best price, the most money to pay back to the taxpayer. But here was Peter Robinson asking Dublin to consider a private sale to the firm that had approached DUP ministers.”

So why was Mr Robinson so keen on PIMCO?

“Unknown to Dublin, or at that stage any other party in the executive, the company [PIMCO] had drafted an agreement with DUP ministers known as a memorandum of understanding or MOU. In it, PIMCO promised to use Northern Ireland suppliers and to create some jobs in a local office… That memorandum of understanding carried one other stipulation. PIMCO offered to forgive the personal guarantees that hung over developers, the threat that could take their very homes.”

And where did the MOU come from?

Spotlight showed sections of a secret recording of a two-hour meeting which took place in a hotel next to Tughan’s, between Frank Cushnahan, Nama developer John Miskelly and David Gray, an accountant.

During the meeting, Mr Cushnahan claimed credit for the MOU.

PIMCO didn’t respond to questions about the MOU.

In December 2013, PIMCO had offered £1billion for the Northern Ireland portfolio but three weeks before it was due to go through, PIMCO called Nama to tell it that they were going to pay Frank Cushnahan.

Readers may recall Nama’s chairman Frank Daly discussing this payment of £5million at the public accounts committee in Dublin in July last year.

Nama felt it would be unacceptable for a Nama advisor to be paid by a company buying the portfolio and, in response, held an emergency meeting about the proposed payment.

Following that meeting, PIMCO was out of the deal. But, instead of stopping the sale and investigating the payment that was due to be paid to Mr Cushnahan at that point, Nama decided the sale should still take place.

Ms McAuley requested the minutes of that meeting of the Nama board but they were entirely redacted.

And who else was there?

Ms McAuley reported that, like before, Nama didn’t know anything about this meeting either.

Three days after this meeting, Mr Robinson was on the phone to Michael Noonan.

When asked about this call which was made on his mobile, at the finance committee in Stormont in December 2015, Mr Robinson said:

The Department of Finance in Dublin told Spotlight that the call was about the sale of the Northern Ireland portfolio but no record of it was kept.

“It turned out to be Irish taxpayers’ biggest single loss on a Nama loan sale.”

The sale also included the condition that Cerberus wouldn’t pay any current or former Nama member, which would include Frank Cushnahan.

But, according to the secretly recorded meeting, Mr Cushnahan himself said he was still involved in the deal – by working with Ian Coulter “to land Cerberus” and that his work was deliberately hidden.

After the sale, Cerberus paid £15million to Brown Rudnik and £7.5million of that was paid on to Tughans. Ian Coulter subsequently moved £6million to an Isle of Man bank account.

So was the money transferred to the Isle of Man for Frank Cushnahan?

Yes – Mr Cushnahan said so himself in the secret recording.

Meanwhile, also during the lunch meeting, the name ‘Ronnie’ was raised.

Spotlight understands this is in reference to Ronnie Hanna, who was head of asset recovery at Nama from April 2010 until April 2015.

“Ronnie Hanna was part of a cabal to seek payment for affecting the biggest property deal in the history of the State.”

During the lunch meeting, Mr Cushnahan suggested that Mr Hanna saved developers in Nama from going under, saying he prevented ‘people’s lights going out’.

“You remember when Gareth Robinson [Peter Robinson’s son] phone me that morning and told me to go to your office – and you phone Ronnie, I know mine would’ve been out – and I’m not the only one.”

Mr Hannah told Spotlight it would be inappropriate to comment as a criminal investigation is under way.

Gareth Robinson did not respond to questions.

Mr Miskelly, from Co. Down, gave Spotlight a statement saying he has been gathering his own detailed and extensive evidence over several years which he says implicates other individuals in financial misconduct.

Ms McAuley reported that she understands this evidence relates to the Northern Ireland portfolio.

“I realised that in view of the continual suppression of my complaints to financial institutions that this would be the only way to expose their financial misconduct and their corrupt dealings.”

“My complaint relates to insider trading and the bribery of foreign officials. I have initiated the whistle blower procedures with the US Securities and Exchange Commission.”

“All payments made by me to any persons during this period are fully accounted for.”

62 thoughts on “Spotlight Falls On Noonan”