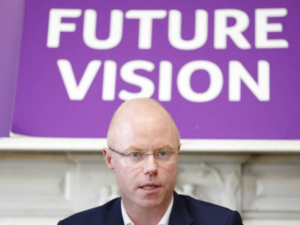 Mr Donnelly said the future of Irish Water should not be solely discussed by Fine Gael and Fianna Fáil negotiators behind closed doors but that it should be discussed among all elected TDs in the Dáil.

At the end of the interview, Mr Donnelly explained that he hasn’t paid his water charges, saying:

“Anyone who’s paying out €160 is essentially being asked to go out into their front garden and set fire to the money”.

Rachael English: “It’s 60 days without a Government and the talks are stuck over water charges. The Social Democrats have said that the water issue must be discussed in the Dáil and not confined to a closed room among Fine Gael and Fianna Fáil negotiators. One of its three TDs, Stephen Donnelly, joins us now, good morning.”

English: “You would have had a say had you remained in the process of talking to find a Government.”

Donnelly: “Well we do have a say, we’re a political party elected to the Dáil and that’s where this should be debated. The Greens entered talks in good faith and had to leave, a lot of Independents entered talks in good faith and had to leave, the Social Democrats met both Fine Gael and Fianna Fáil at the start, we had very constructive talks with both parties. And then we said the numbers are such that you two need to go and come to some sort of agreement and that we would then engage. And we were right: those who did engage before that spent a lot of time in there in good faith and they had to leave. We have now reached out to Fianna Fáil, to Fine Gael, to Sinn Féin, to the Greens, in the last week, because the talks are back on and therefore we are very much in the process – we’re not going to go and prop up a Fine Gael minority government, we said during the campaign we wouldn’t do that…”

English: “But you’ve left Fianna Fáil and Fine Gael to it, in terms of making the arrangements for whatever Government needs to be formulated so they have to do an agreement on Irish Water.”

Donnelly: “No they don’t, the Dáil has to have an agreement on Irish Water so, people are really fed up. We’re on day 60…”

English: “But the Dáil did agree on Irish Water, I mean the thing was discussed, it was debated, it was voted on, it was established…”

Donnelly: “It was and then it was a general election and then the majority of TDS elected ran partly on the basis of changing that decision. Let’s not forget: Irish Water was only one of, I think, only two times in the last Dáil term of five years where the Opposition walked out. If you remember Phil Hogan, the minister, then rammed it through, the whole thing through in three hours. And it has been a disaster right from its beginning and continues to be a disaster. And we now have, what it really is, a totally unacceptable situation where we have Fianna Fáil and Fine Gael locked away in a room, potentially about to collapse the 32nd Dáil on the issue of water. What the Social Democrats are saying is, ‘Look, water was one of the key issues of the election. Obviously there are arguably more pressing issues, like homelessness, like people having to wait 25 times longer on public waiting lists than private waiting lists…'”

English: “Murder on the streets…”

Donnelly: “Like murder, right, like the guards are being 20% under resourced and so forth. There are very, very serious issues. We have one in eight children in the country now in daily poverty. The Dáil needs to get about doing its business.”

English: “So is it ridiculous that the 32nd Dáil is being threatened with collapse over an issue which, you can break it down, to €3 a week per household?”

Donnelly: “Well we think it’s outrageous that it is potentially going to be collapsed and so what we are saying to Fianna Fáil and Fine Gael is: there is clearly an impasse. Both parties ran on quite different positions. We actually don’t believe that either position is a tenable position, either Fianna Fáil or Fine Gael’s position but that’s fine. That’s up to them to decide. We’re saying look: clearly this has reached an impasse. The rest of us want to get on with the job we’ve been elected and paid to do – as I’m sure more Fianna Fáil and Fine Gael TDs. Take the issue of Irish Water out of the talks, bring it back to where it belongs – which is in the Dáil – like let’s not forget, about 90 TDs were elected with a very clear mandate: To end domestic water charges. There are about 90 TDs who would vote accordingly. So let’s not collapse the 32nd Dáil on the issue of water, let’s bring it back..”

Donnelly: “Yes, there’s three things we would do. First of all, we would call for a referendum on public ownership, probably to change Article 10 of the constitution. There is a very real fear of privatisation – probably not in the next few years but in the future. So we would look for a referendum to make sure that could never happen. We would reconstitute Irish Water, you could say end Irish Water, abolish Irish Water but not do what Fianna Fáil is looking to do which, quite frankly, is bonkers – which is send it back to the local authorities – but have a national water board. Because whilst the Government made and unholy mess of Irish Water in the last Dáil, actually the engineers are doing a very good job like they are doing the business that needs to be done on the water system which is great. And the third thing we would do is we would end domestic charges and, partly, and it’s a message people really need to understand, partly because the money that is being raised from domestic charges does nothing other than cover the cost of raising the money. So none of the money that anyone is paying out or not paying out is being used to maintain the system or upgrade the system…”

English: “So all the money to fund water and the repairing of the system should come from the Exchequer, is that what you’re saying?”

Donnelly: “Should continue to come from the Exchequer. Let’s not forget, it costs twice as much in Ireland to provide water as it does in the UK, including northern Ireland where the population density is more or less the same. So what should be done is the engineers should be allowed get on with the job of identifying the leaks, of upgrading the system, that creates very, very significant cost savings. You reinvest those cost savings into upgrading the system. So both from an engineering perspective, from an economic perspective and from a political and democratic perspective, there is a very clear argument that says: end domestic charges, use the savings which are being generated to reinvest and upgrading the system which obviously has to be done…”

‘The Money Will Cover The Cost Of Getting The Money’

76 thoughts on “How To Dismantle Irish Water”