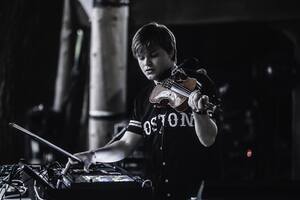 1. Fiddle player and producer Daithí branches out more firmly with new EP Tribes, released this past February, in pursuit of sounds “not just inspired by traditional music, but by the culture, the scenery and atmosphere of the west of Ireland“.

2. Mentored by Young Wonder man Ian Ring, and cutting his teeth by fusing electronica with traditional music, he notched up supports for The XX, Santigold, and DJ Shadow before unveiling 2013 debut album In Flight.

Verdict: A further departure away from lingering influences and into a wider frame of reference, all the while exploring themes and sounds of his native West.