Sheila Larkin wins a €25 voucher to use at Golden Discs nationwide.

Sheila chose blissed out stoner classic Albatross by Peter Green’s Fleetwood Mac (above), a UK number 1 in 1968, “so we can all close our eyes and at least pretend summer is starting…”

Stephen: “Play Time Of The Preacherby Willie Nelson because today is his birthday.”

James Chimney:  “Play ‘Sensitive Outsider‘ by Half Man Half Biscuit because it contains the words “Broadsheet” in the first verse, and reminds me of some of the more….er pretentious up their own hole types that are all too common these days….”

Pooter: ” Play 257 Weeks by Nine Days at  because it was the inspiration for the best lipdub video ever made.”

Clampers Outside: ‘Play April 29th by Sublime because… today is April 29th, silly ’

Earlier: You Hum It We’ll Play It 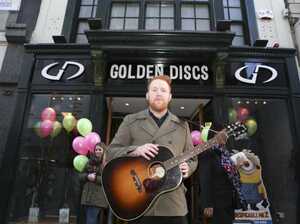 You Hum It, We’ll Play It

23 thoughts on “We’re Playing YOUR Song”