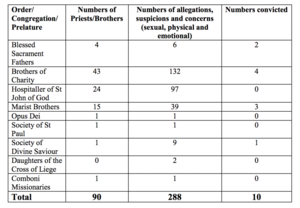 The National Board for Safeguarding Children in the Catholic Church has today published its final tranche of reviews – 30 in total – of child safeguarding practice within certain orders and congregations.

The NBSCCC is a church-run organisation and reviews are done on an invitation basis.

Among the 30 orders or congregations reviewed were the Blessed Sacrament Fathers; the Brothers of Charity; Hospitaller Order Of Saint John of God; the Marist Brothers; and the Personal Prelature of Opus Dei – all of whom had allegations made against them.

The following four orders or congregations – the Society of St Paul; the Society of Divine Saviour (Salvatorians); the Daughters of the Cross of Liege; and the Comboni Missionaries Of The Heart of Jesus – also had allegations made against them but, according to the NBSCCC, no longer have a ministry with children in Ireland.

The 30 reviews  – which can be accessed here – related to complaints made between January 1, 1975 and the period of the review which began in December 2015.

Overall, the reviews found there 288 allegations made against 90 priests, brothers or sisters with just 10 criminal convictions arising from those complaints.

In relation to the Society of Divine Saviour (Salvatorians), the NBSCCC found the following in relation to a now deceased priest, referred to only as Fr A:

“Information received from the Salvatorians, indicate that there was one priest who ministered in Ireland against whom there were allegations of child sexual abuse. According to the Salvatorian case file, there is knowledge of 9 named children who were abused by Fr. A.”

“However, behind the small numbers recorded is this one case of a prolific, long term abuser of children, there is information on file which suggests, by his own admission Fr. A had abused in excess of 100 children, mostly girls in the age range 6 years to 9 years of age, in various parts of Ireland; but Fr. A did not provide the names of these children when making this admission.”

“He worked as a teacher and a seminary lecturer in the UK, a member of the General Council of the Order in Rome, a parish priest in an Australian and in a Dublin parish, and as a congregational archivist and hospital Chaplain in Rome.”

“His abuse began early in his priesthood and lasted at least until 2004.”

“Fr. A was accused in 2002 by a female relative of abusing her when she was a child; and from reviewing the case files this appears to be the first allegation that was made known to the congregation.”

“While it is difficult from the written records to be completely sure of when his Provincial was first made aware of this allegation, Fr. A was withdrawn by the then Provincial from his parish in Dublin in December 2002.”

“By that time Fr. A had been assessed, though it is noted that Fr. A had arranged this assessment himself. The advice of the assessing professional was that, while the abuse alleged did happen, it was probably a once-off event.”

“He did however state that it would probably be wise not to allow Fr. A to have ministry that allowed him access to children. The Provincial wrote to the Archbishop of Dublin informing him that he was withdrawing Fr. A from the parish, and he implied that this was due to the stress of his responsibilities there.”

“The Provincial however did not inform the Archbishop of the real reason for withdrawing the priest; and he subsequently arranged for him to take up a position in the congregation’s archives at the congregation’s Motherhouse in Rome.”

“…As nobody in Rome had been made aware that there were child protection concerns about Fr. A, he was not supervised in any way while he worked in Rome.”

“To date the congregation has not received any allegations relating to Fr. A’s time spent in Rome as an archivist and hospital chaplain.”

“It is recorded that Fr. A returned in May 2004 on holidays to the Dublin parish from which he had previously been withdrawn, and that he said Mass and mixed with parishioners there. It is not recorded on file whether this was Fr. A’s only visit to Ireland following his posting to Rome in early 2003.”

“The Salvatorians are currently investigating an allegation from a woman who was abused as a child by a priest in that Dublin parish in 2004; during which time Fr. A was back on holidays ministering in the parish; it has not been confirmed that the respondent priest was Fr A.”

“…Fr. A was convicted of child sexual abuse in December 2007. The case related to his abuse of ‘several girls over a 25-year period. He was given a custodial sentence of four years with all but 18 month suspended.”

Earlier: ‘There Was No Cover-Up At All’