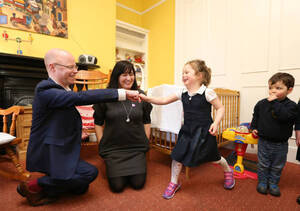 All the international evidence points to the benefits for both society and the individual of having an early-years system where the development of the child is prioritised but also where the mother is empowered to be the best version of herself she chooses to be.

Last Week’s CSO report declaring Ireland as a ‘pricey young and fertile nation’ highlighted the fact that we now have the 3rd most expensive cost of living in the EU with the second highest fertility rates!

Now this presents quite the conundrum because one of the key factors in the increased cost of living is the astronomical costs of childcare in this country. Not much point being fertile, eh, if you can’t afford to have children while maintaining the option to have some form of life outside the home. (Note I said ‘option.)

I recently asked women in my social and professional circle what was the biggest issue they felt facing them today in a broad societal context. All gave varying expressions of the one topic – equality.

Affordable and accessible childcare is one the most fundamental factors in ensuring gender equality in the workplace and wider society yet we have one of the most underdeveloped childcare systems in the world with many families paying the equivalent of a second mortgage for factory-style childcare.

All the international evidence points to the benefits for both society and the individual of having an early-years system where the development of the child is prioritised but also where the mother is empowered to be the best version of herself she chooses to be – either as a stay at home parent or in the workplace.

Choice is the key factor here.

If the glass ceiling is broken, and some would argue that it isn’t- (I personally would say that it is at least cracked) – but if it is, it was broken for that very reason – that women could choose their own paths in life, whatever that path may be.

Thankfully, more and more we are seeing co-responsibility relationships. We are beginning to lose the culture of man as breadwinner, woman as carer. It is an evolving process and here in Ireland we are not very far along the path.

Remember, it’s really not all that long ago that Irish women were forced, by law, to give up their job in the civil service as soon as they married! That type of legacy is a hard one to deviate from, but we are, and as each generation reaches maturity we get a step further away from that draconian past of ours.

Empowerment is not some idealistic notion, empowerment is telling yourself and your children every day that if you want it and you work for it then you can achieve it – regardless of your gender.

We have to move away from the notion that feminism is some female-only issue that requires women to stand on the proverbial soapbox to have our voices heard.

Instead we have to view feminism as men and women equally embracing the notion of equality – an equality where gender is irrelevant.

But for these ideals to be realised society has to provide the basics that not only encourage such gender equality but which facilitate it to be so and childcare is one of the most effective and important ways in which to do that.

Your Vote Is No Good Here

The Arts of Nowhere

To Be A Rock And Not To Troll

9 thoughts on “It’s The Children, Stupid”