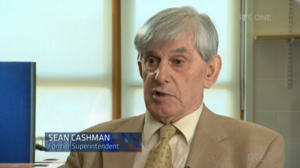 In February Bill Kenneally was jailed for 14 years, after he pleaded guilty to 10 sample counts of indecent assault on 10 boys between October 31, 1984 and December 31, 1987, in Waterford.

Kenneally, whose grandfather and uncle were Fianna Fáil TDs, used his position as a sports coach – basketball, soccer and tennis – to lure and abuse boys.

He was eventually charged – 25 years after Kenneally himself admitted to gardaí that he abused a boy in 1987.

Yesterday, it was reported that Kenneally lodged an appeal with the Court of Criminal Appeal against his sentence.

Further to this, several men who were abused by Kenneally spoke to Damien Tiernan on RTÉ’s Prime Time – with several of them saying some adults in Waterford at the time were aware of the abuse but did nothing about it.

In addition Mr Tiernan spoke to former superintendent Sean Cashman about when Kenneally admitted the abuse in 1987 – after a father reported that his son had been abused.

“He [the father] told me that his son, who was a student at De La Salle, aged about 15, that he was one of a number of students who were being lured to the house of a man named Billy Kenneally and that this man was coming in to the schoolyard and that he was giving them basketball lessons. In a short time, he had started to interfere with them and that there was a sexual contact, content to it and he just wanted to report it to me.”

The father told Cashman his son could not be interviewed so Mr Cashman contacted Kenneally’s uncle, the former Fianna Fáil TD, Billy Keneally, who died in 2009.

The TD arranged for Kenneally to go to the garda station when he met the then Supt Cashman and Inspector PJ Hayes.

“And he went on then to tell me that he had placed handcuffs on this young boy and I asked him, ‘where did it take place?’ and he said it was in his own home.”

“We did not have evidence to charge him now if I… ah, he admitted it, I’ve known a case where a man came through the station at one time and admitted murder that he hadn’t done. So you know the fact, he did admit it and I’ll have to say, I knew he was the culprit, it wasn’t a question of his imagination, I knew he was the culprit but I didn’t have a statement from an injured party.”

“I got absolutely no help from any injured party. None.“

After this, Kenneally was no longer allowed to coach at De La Salle and he was told to get counselling. He wasn’t questioned by the gardai again. He continued to live in Waterford.

Twenty five years later, one of boys who had been abused by Kenneally discovered that Kenneally was still involved in coaching basketball but not in a school capacity.

Jason Clancy went to the gardaí in 2012 to tell them about the abuse he suffered as a boy. After waiving his right to anonymity, other victims came forward.

There were originally 74 charges against Kenneally.