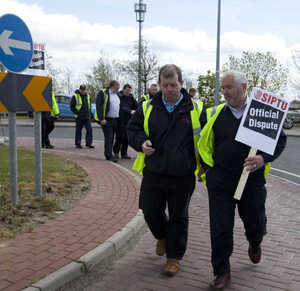 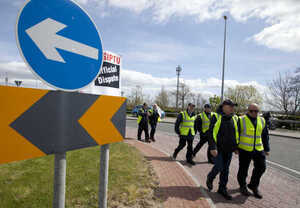 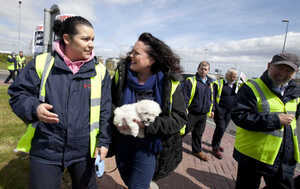 Siptu members (including Maltese Terrie ‘Lemmy’, above) and Luas drivers picket the Red Cow Luas depot in their ongoing dispute with Transdev.

The National Transport Authority has fined Transdev €1m for failing to deliver the service. The net cost to the company is €400,000.

RTÉ has asked the NTA at what point Transdev’s failure to deliver the service would lead to it losing the contract, rather than just being fined. A response is awaited.

A spokesperson for Minister for Transport Paschal Donohoe this afternoon said: “It is up to both sides to work together to narrow their differences and find a resolution to this dispute, which continues to negatively impact commuters.”

Earlier: The Tracks Of Our Tears

Meanwhile, On The Red Line

55 thoughts on “Round The Bend”