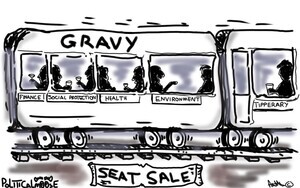 LV: (Tries to snort but ends up sneezing) “Ok Mother.”

RB: “Watch It! Will you … you’re supposed to be a doctor” ( slyly slides FFitz’s scarf across the snot on his shoulder)

FF: “No need for that, you just need to act like a grown up now Dr Leo, so go down there by that other Northsider …what’s his name again?”

RD-CW: “‘scuse me now can I have yere attention before the Prayers, it’s clear some of the new Ministers need to learn to conduct themselves and act classy – knock off this photobombing and shoving colleagues out of the way. It’s making ye look pushy and…”

KZ: “What are you …. I take offence at been accused of been pushy in any way … I’m quite camera shy actually.” (A chorus of sniggers, giggles and ha!’s rings around the Phoenix Park)

MMOC: “What about that Heather’wan there…bloody well blocking everyone out’ve the way ….What else could I do but bend out.”

MN: “Over … more like … now that Oliva Mitchell taught you right … oh she did, so she did ooover there in that Mmmaunt Aaaan’val ya call it .. isn’t that right?”

RD-CW: “Whatever…. What ye all need now is some manners and decorum, you can’t be carrying on like that at a high tech turning the sod, Mary, throwing yourself in front of cameras blocking out the likes of Mr O’Brien n’ Bill Gates … what are ya like.”

All rise and rush to EK except SC, RB, LV, and MN, who’s settled into one of the chairs with a snoozie grunt. Handshakes, back slaps and mwah mwahs and then the feeding rush back to the table where KZ then needs to be hoofed off the seat beside EK.

EK: “Well now … What d’ye make of all that now, Michael D is looking marvellous.”

FF: “That dog hair is everywhere.”

SH: (Waving like a gimp) “Sorry Taoiseach, sorry. But I can’t hear you.”

EK: (As he sends the corner of his hankie up a nostril) “Who’s that?”

FF: “Simon Harris, Taoiseach.” Whispers: “The one you put into Leo’s job.”

EK: “Ah sur’ he should be in a high-chair, get him a high-chair. Mr Ross, would you mind?”

EK: “Minister for Transport, that’s your brief, now go on out there and ask the Higgins’s people for a loan of a high-chair or a booster seat, sur’ they must have a booster seat lying around.”

SR: “On a point of order Taoiseach, I propose we discuss and agree seating arrangements before any other matter on the Order of Business.”

EK: (to FF): “We’ve an order of business do we?”  (FF shrugs) “Terry said all we had to do was sit down for an hour and watch telly for all she cared. Just close a door behind us, she said…. What she tell you to do?”

FF: “Just not to let Bruton and Long Simon get too tight and not to let any of the new crowd near Michael.”

FF: “Same as before just with meeting with the Healy Rays and Mattie and all that crowd as well now.”

DN: (West of the Shannon shouty voice): “… I’m the Minister for Communications… so I can… I second Minister Ross’s motion for a seating arrangement to be agreed.”

SC: “Tell ya what lads, delighted not ta’ be stuck next ta’ that Deenihan again no matter what Ross and his pals want.”

MC “Maybe everyone just needs a bitta’ve bite, T’shoch … lads have bin’ hanging around since this morning waiting on that shower to cop on’ta themselves, me stomach thinks me throat’s cut.”

EK: “Here Mary, do a job for us, go out to Sabina an’ have her put something together there for us. Nothing fancy.”

SH: “Can I get a Happy Meal, Taoiseach?”

LV: “Zappone, can you take care of the child please.”

KZ: “How dare you! I take serious issue with the assumption that as a woman I’m expected to assume the role of responsibility for a child.”

(Place opens up with pens flying, chair scrawling along the parquet, snorting sniggering and more sneezing…..)

KZ: “Opps. Apologies colleagues, I thought I was Minister for Education and Social Welfare and the Environment and Justice.”

EK: “Christ, why did I bother drawing all this shit on meself again.”

HH: “Grab me a quarter pounder meal, with a Strawberry Milkshake while yer at it Paschal.”

SC: “Sur let’s all head over to yours so. Noonan can go to bed.”

RD-CW: “But sur they’ll see us all going, we should stay till after the Late Late … make it look good. Turn on the telly there, Fintin.”

After a feed of Sausage Suppers, (or M&S salad bowls for some) and tay and a few trays of swiss roll, the new Cabinet line their chairs around the telly, except for EK who’s playing Candy Crush on CF’s phone.

FMcG: “Are you still breastfeeding …”

MMOC: “That’s bloody Noonan ….. bloody drooling again …. I’m not going to be stuck minding him now … ye can have yere shite …. Paschal you’re over there in Finance now with your expenditures and reforms, you look after him.”

PD: “thSur thereths no need for that now Mary … that’ll be you one day.”

SH: “Is there anything else on, it’s only any good when the toys are on.”

LV: “Here, some Netflix here on my iPad.”

SH: (Shuffles himself and his chair off)

LV: “I’ve set Code Black to play through … the little prick’ll shit himself.”

Door opens and Damien English arrives with ice-lolls for everyone in a mucky Repak cooler box, as they hand him back the wrappers one-by-one:

MW-AG: “I shouldn’t really but it’s a Friday night.”

MN: “Arra’ sur ya can have yer pavalovas and yer terrymesues and yer pannacotties, ya can’t bate an oul’ choc ice.”

MN: “It doesn’t do you well ta’have a smart mouth tho does it, English?”

MC: “Ah jaysus I’m only bloatered after all that cake, give mine ta’ Flanagan there, he needs sum’ting in his gob.”

FMCG: “Sur I’ll bring them home to the kids.”

EK: “Give mine to Fionnuala, she loves her Brunch’s.”

FF: “I wouldn’t eat anything off a stick.”

DN: “Any tubs or screwballs in that box, Damien?”

HH: “Or Magnums? Way more eating in a Magnum.”

SC: (After chunking off the best bit of his Loop D Loop and tossing the rest back into the box) “Now go on and fuck yerself back ta’ Meath, English.”

RB: “Or you won’t be the only sore ring in the party. Thanks for the Chillie Willie by the way.”

RD-CW: “How are you getting on in your new job, Damien…..I think those dogs might need walking.”