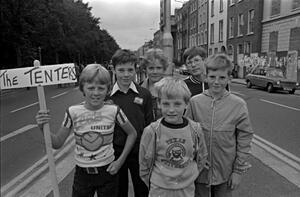 Children from the Tenters, Dublin 8 taking part in the Dublin Inner City Games, 1978

Your help would be greatly appreciated. I’m considering buying a house in the Tenters [a section of The Liberties], Dublin 8. I’m familiar with some of the surrounding neighbourhoods but not so familiar with the Tenters. I have noticed various posts over the years featuring the area so I’m guessing some of your readers do or have lived there. Any feedback, or thoughts on the area would be great.

22 thoughts on “Ask A Broadsheet Reader”