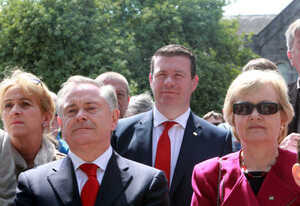 This was Alan Johnson’s response to the former London Mayor’s latest unwelcome intervention in a UK Labour row.

Substitute the name “Alan Kelly” for “Ken Livingstone” and Johnson’s axiom could just be as applicable here.

Perhaps it’s his pugnacious ‘I tell it like it is’ style, but Alan Kelly has come to be personally identified with two of the last government’s biggest political failures: Irish Water to the housing crisis, not to mention his “power is a drug… it suits me” interview or his penchant for adding to his own party’s travails.

While Kelly’s supporters can argue that he inherited the policy messes that were Irish Water and housing/homelessness, he knew what he was getting into and still decided that the best approach was the one he adopted: the unpopular populist.

So, why is the Labour party giving even the slightest consideration to making Kelly its next leader?

The sad reality for Ireland’s oldest political party is that the choices facing it are severely limited. While it can opt for the safe pair of hands that it is Brendan Howlin, Howlin comes with a lot of baggage, not least over 20 years as a political insider, even when Labour was in opposition, Howlin managed to hold office as Leas Ceann Comhairle 2007 – 2011.

Sean Sherlock may seem, in contrast, like a more likeable and fresher option, indeed the 400+ people who replied to my Twitter poll rated him much higher than Kelly, but that very freshness that may be his biggest weakness.

Sherlock has never been seriously tested and does he possess the gravitas or presence to carve out a niche for Labour against so many bigger opposition beasts? The same questions hang over Jan O’Sullivan.

So does Labour have to take another look at Kelly?

It’s the question Labour TDs will be asking themselves over the coming days and – depending on their decision – it may be the question that party members will have to wrestle with thereafter, if Kelly’s nomination can get past the parliamentary party.

Given that Kelly secured over 50% of the vote when he won the Deputy Leadership back in July 2014, the parliamentary party would be unwise to deny members the right to have the final say.

To deny Kelly the right to run, in favour of a Howlin coronation, may look like a good idea on paper, but it is the last thing that a party – that is now closer to extinction than Fianna Fáil was back in early 2011 – should do.

Labour needs to reconnect itself with its members and supporters – finding a way to cut the membership out of deciding on who should lead the fightback, is no way to start that fightback.

If they handle it right Labour can benefit from having a leadership contest, with plenty of constituency hustings, where members get to grill those looking to lead them back from the wilderness.

Let Kelly run. Let him explain his record as deputy leader and his central role in the party’s demise and – most importantly – allow him the opportunity to show if there is something… anything… more to him than political ambition and hunger.

How much do we really know about Kelly, even after last Friday’s Late Late Show interview and his July 2015 Saturday Night with Miriam one?

No a lot, I suspect – well not anything substantive. There is more than a hint of the “rose without trace” about Kelly.

It is as if he arrived fully formed on the political scene back in 2007 when he became a Senator.

His progress to the Cabinet table was fast-tracked thereafter in two-yearly steps: in 2009 he was elected to the European Parliament; in 2011 he returned from Europe to become a T.D. (managing to jump two steps in one bound by becoming a Minister of State within a month of becoming a TD), leading finally to his becoming deputy leader and Minister for the Environment in 2014.

Though his supporters may point to his less than flattering media coverage as a counter argument, to the outside observer Kelly has had a charmed political career to date.

He has moved seamlessly up the political ranks and achieved senior ministerial office in the same time that it has taken others to manage to just make it on to the local Council (or not, in the case of yours truly).

Has that all been due to his drive and ambition alone?

Perhaps it has – and as other pundits have observed, drive energy and ambition are in desperately short supply in the Labour party right now.

But so too is humility and the capacity to recognise just how far out of touch the Labour Party became with its voters under Gilmore Burton and Kelly.

Are these traits readily associated with Kelly? That’s a matter the Labour party members will have to consider in the weeks ahead – if they are given the chance.

35 thoughts on “Why They Can’t Quit Him”