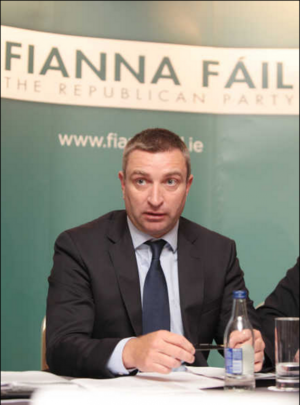 You may recall how, in February 2014, Fianna Fáil Niall Collins read into the Dáil record a section of the transcript of a 2012 conversation between Sgt Maurice McCabe and the then Garda Confidential Recipient Oliver Connolly.

The section included the following:

“Maurice, and this is just personal advice to you, if Shatter thinks you’re screwing him, you’re finished…If stuff is to get into print, broadcast media, it becomes public before the court and not any other way. If Shatter thinks it’s you, or if he thinks that it is told by the Commissioner or the gardaí, here’s this guy again trying another route to put you under pressure, he’ll go after you.”

In relation to the transcript, Justice Kevin O’Higgins found that Mr Shatter “adamantly repudiated” the allegations and that “His [Shatter’s] denials were unchallenged and uncontradicted, and are unreservedly accepted by this commission”.

Months later, in a speech given on October 3 2014, Mr Collins said:

The problems which have manifested themselves in An Garda Síochána and GSOC and were reported to the former Minister for Justice were ignored, dismissed or glossed over in order to save the embarrassment of those in senior positions who decided that not taking responsibility was a key management skill.

This approach was a massive disservice to the ordinary members of An Garda Síochána and to the citizens of Ireland.

As a result of this dereliction of duty we have seen the resignation of the Garda Confidential Recipient, the Garda Commissioner, the Minister for Justice and Equality and the Secretary General of the Department.

We have also witnessed the establishment of an unprecedented number of Commissions of Investigation surrounding the Department of Justice and there are still more Commissions to be established.

One would hope then that lessons will be learned as to how to deal with issues arising in the Garda force and the Department of Justice from this date forward.

…The Guerin Report highlighted the fact that Sergeant Maurice McCabe was correct in his actions to highlight the failure to administrate justice in Bailieboro Garda District.

To be frank, the findings were an embarrassment for this Fine Gael Labour government who denied there was ever any issue in Justice and defended former Minister Shatter month after month. He dismissed and belittled the Whistle-blowers and was supported by the Taoiseach while doing this.

In order for public confidence to be restored in An Garda Síochána it is necessary to establish fully and frankly how the situation surrounding the malpractice in Cavan was allowed to occur, continue and be covered up over such a long period of time.

Niall Collins: “We can only deal with what’s written in the report, from what Judge Kevin O’Higgins has reported. And, secondly, my party leader, as you know, called for clarification from Nóirín O’Sullivan over the weekend and we received that clarification and we accept the clarification, I want to say, because Nóirín O’Sullivan is the head of An Garda Síochána and she was asked to give a clarification and she has given it and I think we either accept it or we don’t. And I think the fact that we’ve had so much discussion which is now bordering on very detailed legal argument about, you know, the difference between evidence and submissions, and the fact that the Commission held its work and holds its work in private, you know, is really, bypassing and forgetting the very central players in the whole unfortunate saga who are the victims of crime. And I think we have to keep uppermost and centre stage the impact and the failings of the system and indeed of the State on our victims of crime and if you recall, the terms of reference, which established and enabled the O’Higgins commission investigation was actually dominated – three quarters of the terms of reference were to do with named specific incidences where members of the public weren’t properly served by An Garda Síochána…”

Seán O’Rourke: “So, from what you’re saying, Niall Collins, you would appear to be satisfied with Commissioner O’Sullivan’s statement last night and that should be the end of this affair?”

Collins: “Well, I am. And I’ll tell you why. She’s the head of An Garda Siochana, she’s tasked with an exceptionally difficult job, Seán. We have a whole change agenda, a whole reform agenda and process going on within An Garda Siochana and she has presented to the Oireachtas Justice Committee on many occasions in relation to how she’s doing that. She has an exceptionally difficult job…we are constrained, as I read it, now I don’t have legal background and we have lots of people offering different legal opinion, the Commission has to do its work in private and you know persons aren’t allowed to divulge the proceedings, or indeed, the evidence…”

After The Spin Cycle

‘We Are Part Of A Cover-Up’