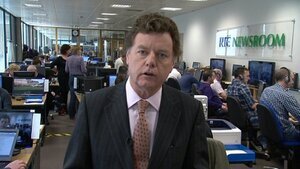 It’s a bottle of smoke.

And it really is a big ask in any situation to request that people disclose what they said to their lawyers in the course of proceedings or a Commission of Inquiry of whatever.

But, as things stand, what we do know from leaked transcripts is that there was an initial suggestion by the lawyer for the Commissioner that malice would have been part of the motivation attributed to Maurice McCabe but then, when he was questioned by the judge, some months later, another transcript, piece of transcript that’s leaked shows that he withdrew that effectively and said he simply wanted to question Sgt McCabe’s motivation and credibility which is bad enough when you think about it.

… the whole thing is really overly complicated by various disclosures and can be boiled down to what the Commissioner felt about Maurice McCabe at the time she was talking to her lawyers in advance of the O’Higgins commission.

Now I don’t know how much further we’re going to get because nobody is suggesting that the full transcript which would be voluminous of the commission is being published because that would call into question how people would behave in front of any future tribunals.

So I think we would probably have to wait until the Dáil debate on the O’Higgins report itself which we think will be next week. The Taoiseach will have to choose his words very carefully in relation to Alan Shatter, in relation to Maurice McCabe, in relation to Noirin O’Sullivan.

And he’ll also have to deal with the findings and the recommendations of the commission in relation to very questionable behaviour of gardaí in Baileboro which sadly has been somewhat obscured by the politics controversies.

RTÉ Political Correspondent David Davin-Power speaking on News At One this afternoon.

Readers may note Garda Commissioner Nóirín O’Sullivan’s legal counsel made his withdrawal after Sgt Maurice McCabe gave Justice O’Higgins a transcript of a recording of the meeting he held with two gardaí in Mullingar.

A Good Nose For A Story