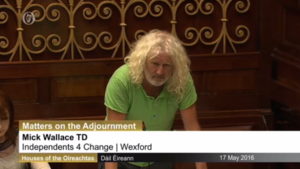 They were speaking about Garda Commissioner Nóirín O’Sullivan’s representation at the O’Higgins Commission of Investigation in respect of Sgt Maurice McCabe.

The transcripts revealed that Mr Smyth initially told Mr O’Higgins: “My instructions are to challenge the integrity of Sgt McCabe and his motivation.”

The two men then had the following exchange:

O’Higgins: “…An attack on somebody’s credibility and his motivation or integrity is something that really doesn’t form part of this inquiry. It would be necessary for you to go further and say that the complaints and the actions of Sgt McCabe were motivated by… that is motivation was dishonest or wrong…In other words that he made these allegations not in good faith but because he was motivated by malice, by some such motive and that impinges on his integrity. If those are your instructions from the Commissioner, so be it.”

Smyth: “Yes. As the evidence will demonstrate judge…[later] this isn’t something I’m pulling out of the sky, judge, I mean I can only act on instructions.”

Later, in November – after Sgt McCabe produced a transcript of his meeting in Mullingar with two gardaí – Mr Smyth told Justice O’Higgins that, in fact, he, on behalf of Ms O’Sullivan, was not challenging Sgt McCabe’s integrity but just his credibility and motivation.

Mr Smyth said he erred earlier when he said ‘integrity’.

Clare Daly: “I listened to the Tánaiste during Leaders’ Questions with a mixture of disbelief and awe. Does she really believe that the questions about the conduct of the Garda Commissioner are going to go away? Does she really believe that, by saying that the Commissioner made it clear that she supported Maurice McCabe, it is the end of the matter?”

“What the Commissioner’s statement actually said was that she had never regarded Maurice McCabe as malicious. Fair play to her, that is very nice, but it is not the issue at hand. The issue in front of the public is that the Garda Commissioner’s legal team, allegedly on her instruction, attempted to mislead the commission deliberately by entering false information in order to challenge the motivation and credibility of Maurice McCabe.”

“The fact that legal counsel has stated that the attempt to challenge his integrity was its idea and not the Commissioner’s does not make any difference. It is reminiscent of the former Minister, Alan Shatter, throwing Oliver Connolly under the bus.”

“The commission was told that two senior gardaí would give direct evidence to the effect that Maurice McCabe was present at a meeting and stated that he operated under malice. It was only when irrefutable evidence was presented showing it to be false that the allegation was withdrawn.”

“If the Tánaiste does not have a problem with this, we are in even bigger trouble than I believed. There is an immediate crisis of trust and confidence in the Commissioner. Public statements uttered by her in support of whistleblowers have been contradicted by her actions behind the scenes.”

“The Tánaiste should not be surprised about that because we are not. Eighteen times since the Tánaiste became Minister, Deputy Wallace and I have tabled the issue of Commissioner O’Sullivan’s treatment of the whistleblowers Mr. Keith Harrison and Mr. Nick Kehoe.”

“The Tánaiste has done nothing. Will she launch a full investigation into the Commissioner’s actions in accordance with the Garda Síochána (Policing Authority and Miscellaneous Provisions) Act, under which she can investigate and remove the Commissioner for actions that discredit her office?”

“Will she commission the Garda Síochána Ombudsman Office, GSOC, to launch an investigation? If not, why not?

I am reminded of a memorable contribution by Deputy Wallace in the Dáil when he told the former Minister that it was time for the latter to go and to take the then Commissioner with him. It is obvious that it is time for the current Commissioner to go. Unless the Tánaiste acts, the Commissioner will take her with her.”

“We still do not know whether Ms Nóirín O’Sullivan’s legal team, under her direction, handed documents to the commission that contained a false statement. That is supposedly a criminal offence. This is a serious matter.”

“I find it difficult to believe that, when there is so much discussion about doing things differently in all aspects of politics, Fianna Fáil does not want to know about this situation. It just wants the issue to go away as well. This is shocking.”

“What the Commissioner says in public is different to what is happening on the ground. Keith Harrison and Nick Kehoe have been treated abysmally for two years. Both are out sick now. One gets less than €300 per week and the other gets nothing. Every effort has been made to hound them out of their jobs.”

“It is two years since Mr. Harrison tried to get a proper hearing and he has only had one proper meeting with GSOC. GSOC requested Mr. Kehoe’s file after a poor internal Garda investigation. The Garda was given 30 days to deliver it but still has not done so.”

“Ms Nóirín O’Sullivan asserts that dissent is not disloyalty, but that is not true. Now it is being claimed that the question of integrity was not raised and the senior counsel is being thrown under the bus or is taking one for the team.”

“The Commissioner is not even rowing back on how she questioned Maurice McCabe’s motivation. She has not rowed back on the fact that she was questioning his character. Who in God’s name would be a whistleblower? She is not fit to be the Commissioner.”

“Nothing has changed. It is as it was. We will not improve or change how we do policing in Ireland until we change the hierarchy and start from scratch.”

20 thoughts on “‘Nothing Has Changed’”