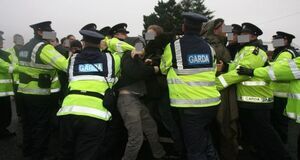 “Our involvement with the pair of whistleblowers [Maurice McCabe and John Wilson] in this case actually started as a result of the protests here [against] Corrib. It was the cases of the rape tape allegations and that being brought to the public eye with the protestors with Corrib.

There was a Vincent Browne programme [TV3, April 2011]  that dealt with that issue. I was on the panel and I made some points . . . particularly about the fact that things hadn’t changed much since Donegal and the Morris [tribunal] . . . that there was a systemic problem of accountability with An Garda Síochána…

…The first whistleblower [Maurice McCabe] guard happened to be watching the TV that night said, that’s somebody who I think I could get on with, and he contacted me after that and arranged to come up to Dublin . . .

…He said he would stay in contact with us, and he did that . . . and in the summer of 2012, when we were in the news a bit and a lot of the media being incredibly negative about us, the second whistleblowing guard [John Wilson]  said, ‘God, these people seem to have a bit of backbone, I think we’ll get in touch with them again’. And this time they were ready to go public.”

Clare Daly at Who Polices the Police? conference, Inver (near Rossport) in north Mayo on November 23, 2013. The women who came forward with the tape were accused by then Minister for Justice of exploiting the words said by the guards and tampering with the editing of the  tape.

Previously: Corrib Garda: “Give Me Your Name And Address Or I’ll Rape You”

14 thoughts on “The Long Tail Of The Corrib Rape Tape”