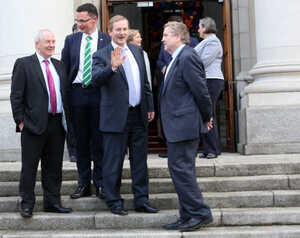 The Taoiseach has missed the opportunity to promote each of his party’s TDs to ministerial rank.

In the days of old politics some of these could be partially placated by being appointed to chair one of the many Oireachtas committees that existed.

Oireachtas committees are not as numerous as they once were. This though could change. What will certainly change is the chair of these committees being in the gift of the government of the day.It’s more likely the majority of these roles will be played by opposition TDs. In a more accountable system they all should be.

There are other baubles to appeal to the injured ego. Heading delegations to British Irish Parliamentary Assembly, to the OSCE, to the World Parliamentary Forum; gives potential for foreign travel to mitigate the slighted self importance of some.

The problem for Taoiseach is that he doesn’t seem to be all that interested in accountability. He does care a lot about managing his party. He now has twenty three TDs who are not seen to be that important ‘up in Dublin’.

He should have seen through the courage of his (slight) convictions. He has missed the opportunity of promoting each of his party’s TDs to ministerial rank.

Finding suitable titles might prove a challenge. He could start by resurrecting some of the department headings he has thought now longer necessary for a cabinet position. There are other templates in place that might also help.

The role of Minister of State has in the past been used to develop a cross departmental approach to specified, often minority, interest groups.This approach has been used for women, for older people and younger people and for people with disability.

There hasn’t always been a sensitivity in how these offices should be titled. At a time, pre-politics, when I was involved in youth work, I thought that having a Minister for State for Youth Affairs was only asking for trouble.

A brave Taoiseach would appoint a Minister for State with special responsibility for the Travelling Community.

Once, in the Rainbow Government of 94-97 Liz McManus as a Democratic Left Minister of State, played something of this role but it related mainly to accommodation.

If the Taoiseach was honest about the political intent behind Minister of State appointments he would give them more appropriate titles.

I would like to suggest a Minster of State with responsibility for Funeral Attendances. Located in the Department of the Taoiseach, this Minister of State could assist in the Chief Whip’s office to ensure that all the appropriate funerals are attended, without key votes being missed.

Don’t laugh. It will save some civil servant reading the death notices.

37 thoughts on “Boys For The Jobs”