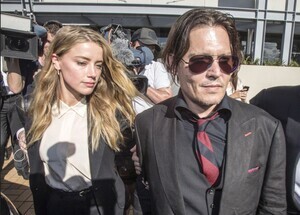 ‘No way, it can’t be true, sure I LOVE him.’ – Me, in a fleeting moment of ridiculous ignorance upon hearing of the Johnny Depp abuse claims.

It’s true, I’ve been a fan of Johnny for as long as I can recall and apart from his obvious charms, there’s all the lovely fuzzy stories of him in full Jack Sparrow costume visiting children’s hospitals and bringing joy to smiling little faces, there’s the lovable rogue element to him but a wife beater, not in a million years surely?

Without casting any aspersions on either Mr Depp or Ms Heard in this particular case, it got me thinking about our attitudes, in general, to such allegations.

How could a good looking, intelligent, articulate, lovable man do something so heinous? Shouldn’t they be huddled figures with gnarly noses, sleeveless vests with beer and sweat stains and a general air of menace about them? But if they were, who would ever fall in love with them?

My initial, albeit momentary, reaction surprised me. How dare I make a judgement so quickly on a woman’s allegations just because I had a particular image in my head of her alleged abuser.

SAFE Ireland, an organisation that helps women and children in dangerous domestic situations, have previously called for a large scale study into domestic violence and its type and severity.

But in a survey with 40 women who had interacted with the criminal justice system on issues of domestic abuse over one third of them reported suffering either physical, emotional or psychological abuse on a daily basis while over half reported a serious threat to their lives.

Were they all partnered up with Vlad the Impaler or was it Joe that you have a pint with on a Friday or Paul who you get a lift to work with – you know, guys as respectable as Johnny Depp appears to be? You know the answer to that and it’s as scary as is it unpalatable.

Now let me say, to be clear, I’m very aware that domestic violence is not a women’s only issue and we are increasingly seeing men presenting to services as victims of domestic abuse but by a country mile female victims outnumber them.

SAFE Ireland estimates that on average 4000 women and children a year spend time in the extremely limited (and under-resources) refuges for victims of domestic violence. 4000!

And they’re just the ones who find the capacity to make a break for it and seek help. How many others are physically, emotionally and indeed financially trapped in a violent home life?

Women’s Aid, another organisation engaging with victims of domestic abuse, saw its funding cut by 31% during the recession and it has yet to be reinstated.

Despite that cut, the organisation managed to establish a 24/7 helpline and in the first month of operation the demand for the ‘out of hours’ service surpassed expectations by 283%.

There also currently exists a loophole in our laws which means that women in ‘dating relationships’ are not protected by the Domestic Violence Act.

Many victims presenting to organisations have never lived with their partner and are therefore not protected under the Act.

We’re also now firmly in the digital age and online interactions have become a significant part of any relationship yet there is no legislation to address cyber-stalking for example.

The laws are inadequate for the protection of people who are victimised in this way but the criminal justice system has more serious issues than that in this regard.

A couple of months ago I had cause to ring the Guards in the early hours when a horrifically violent scene played out in a house I was overlooking. I could not only hear, but see, the assault being inflicted on this woman. I rang 999 and desperately pleaded with them to come immediately.

The dispatcher calmly asked me was it ‘an assault or a domestic?’ I retorted ‘is there a difference?’ and she told me yes, yes there was. An assault would illicit a faster response time.

Seriously. (I like to think she told me that in a female solidarity kind of eye-roll way but either way the truth of that was horrific.) ‘Well then put it in as a serious assault and get someone here immediately’ I told her.

She did and they arrived very soon after to be fair but not in time to stop the woman requiring removal in an ambulance.

There are myriad nuances to be worked out but work them out we must because domestic violence is a real issue that’s not going away and as a society we have to be prepared to confront it and address it head on.

So it is conflated with other serious crimes against the person rather than considering it somehow ‘less than’ because it was between a couple or ‘behind closed doors.’

And that stands whether it’s Johnny gorgeous lovely fuzzy Depp or Tommy sweaty beer guzzling wifebeater down the road.

To Reach The Parts Others Won’t Touch

111 thoughts on “Nothing Domestic”