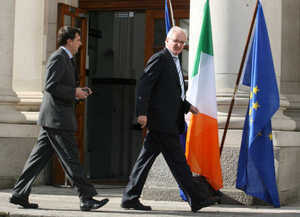 The author examines his own voting record on Europe integration and argues that it was never based on opposition to the idea of a European Union or the need to detach ourselves from it.

I was nine years old when Ireland voted to become what was then known as the European Economic Community. I had barely been in the country for a year, my family having moved from the United States to my mother’s hometown of Cork.

Even at that stage I had been socially conditioned enough to realise that you should not tilt against the crowd. The message was simple – Yes to joining was good; No to not joining was bad.

The Labour Party offered what passed for opposition to that proposal then. They and the trade unions also spoke then with the same voice. A neighbour identified himself as a No voter. I thought him mad. In the end less than one in five of those who came out to vote voted No.

The government and the political establishment were pleased with the outcome. They presumed that having voted the people would never have to vote again, the issue having once and finally been decided.

Fourteen years later that establishment reckoned without the dogged determination of Raymond Crotty, who won an important Supreme Court decision that any change to the Treaty of Rome would also be a change to the Irish Constitution, which would always require a referendum of the Irish people.

By then I had reached the physical age (if not the emotional maturity) of being an adult. I got to vote in the referendum on the Single European Act. I voted No.

Labour now in government sought a Yes vote. Of all the political parties represented then in Dáil Éireann, only The Workers Party articulated a No position.

In the subsequent referenda – Maastricht, Amsterdam and Nice (twice), along with The Greens, I continued to vote No. The reasons were many, and to my mind still quite valid.

What they were never was based on opposition to the idea of a European Union or the need to detach ourselves from it.

There was, and continues to be a fear about some nations within the Union being seen as more equal than others. More than a concern of the existence of a democratic deficit.

A headlong rush into aspects of becoming a single unitary state such as a single currency or the idea of a common army; that were either ill thought out or were never necessary, brought about obvious concerns and doubts.

By the time the Treaty of Lisbon required ratification The Greens were in government in Ireland. It caused considerable debate within the party.

I rationalised a Yes vote on the basis that Lisbon at least corrected some of the worst aspects of Nice. I also voted Yes to the Fiscal Treaty. This was despite having voted against Maastricht because of the way a single currency was being introduced in such an unthought through way.

Having established residence in Wales to participate in the Welsh Assembly election, I find myself now entitled to vote in the Brexit referendum there.

Unlike all the Irish referenda, Brexit isn’t about a better Europe.

It’s about a mythical Britain. It isn’t about protecting or enhancing the role of nation states. It’s about pandering to bitter isolationists whose superior sense of being can’t abide a World where nations need to co-operate with each other.

My having a vote in this referendum may be a quirk, but this is one windmill I will enjoy tilting at.