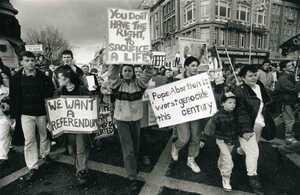 From top: Street protests in the wake of the X case in 1992; Sinéad Kennedy

The current government has been in office for just over a month and, despite its heartfelt efforts to continue that fine governmental tradition of hypocrisy and inaction on abortion, the eighth amendment is fast becoming for Fine Gael the dreaded political issue that just won’t go away.

Just as Fine Gael were congratulating themselves on having successfully kicked the abortion can another six months down the road with the announcement of the establishment of the vague-sounding  “citizen’s assembly” to make recommendation on the eighth amendment, the abortion issue quickly returned to the political headlines.

Tánaiste and Minister for Justice, Frances Fitzgerald, barely had time to attend her first cabinet meeting before flying to Geneva to face questioning over Ireland’s Human Rights record.

But it was Ireland’s restrictive abortion laws that were the main issue of concern for the UN member states with 15 countries issuing recommendations to reform Ireland’s abortion laws and the need for adequate sexual and reproductive health and rights for Irish women.

Then, Enda Kenny, tired of all those annoying left TDs continually hassling him about women’s rights and abortion, decided to try to mansplain it away.

Under questioning from Anti-Austerity Alliance – People Before Profit TDs Ruth Coppinger and Bríd Smith, he claimed that:

“There were three referenda after that. And, in each case, in each of those referenda, by the people, not just by any parties, the people decided to keep that reference in the constitution.”

This is, of course, blatantly false and was either a deliberate attempt to mislead and distort the debate or, was a display of breath-taking ignorance.

Since the 1983 referendum there have been two further referendums. One in 1992, as a result of the X case judgment, asked the electorate to reverse the X case decision and exclude suicide as grounds for an abortion.

The electorate refused voting in favour of the less-restrictive option. There, was a further attempt to reverse the X case judgment in a 2002 referendum but again people refused to further restrict abortion access.

On the two occasions where people were asked to restrict abortion they refused and the electorate has never been given the opportunity to vote in support of a more liberal abortion regime.

Then, last week, in a ground-breaking ruling, the United Nations Human Rights Committee found that Ireland’s prohibition on abortion subjected Amanda Mellet to severe emotional and mental pain and suffering by denying her access to abortion services in Ireland.

Ms Mellet was denied an abortion in Ireland in 2011 after learning that her pregnancy had a fatal foetal impairment.

This ruling is particularly significant because it is the first time that, in response to an individual complaint, an international human rights court or committee has found that the prohibition and criminalisation of abortion in itself results in human rights violations.

The committee instructed the Irish government to act promptly and effectively to redress the harm Amanda Mellet suffered and reform its laws to ensure other women do not face similar human rights violations and to guarantee effective, timely and accessible procedures for abortion in Ireland.

This leaves the government in a difficult bind.

In March of this year, Amnesty International Ireland/Red C revealed in detail people’s attitude to abortion: It found that 87% of respondents supported wider access to abortion in Ireland and 72% favoured the decriminalisation of abortion.

It also found that 69% wanted the expansion of Ireland’s abortion laws to be a priority for the new government.

Even TDs in Fine Gael and Fianna Fail are (slowly) beginning to realise how out of step the Irish political establishment is with the Irish population’s views on abortion, and the leadership of both parties are coming under some pressure from backbenchers to act.

The more liberal wings of both of these parties hope is that anger at Ireland’s restrictive abortion regime could be dissipated by offering limited abortion in circumstances of fatal foetal abnormality, cases of rape and, possibility, series risk to health.

Perhaps, five years ago this may have been the case.

But a whole new generation of young activists have been politicised and angered by the death of Savita Halappanavar in 2012 and inspired and galvanised into action by the Marriage Equality referendum victory last year.

They want to see free, safe and legal abortion in Ireland and will not be so easy deflected.

Meanwhile, every day 10 women leave this country, providing they have the money and necessary travel documents, and travel to Britain for an abortion.

Those who cannot travel seek out other solutions turning to websites like WomenHelp.org and WomenOnWeb.org to access the abortion pill. In doing so they put themselves at risk of criminal prosecution and face up to 14 years in prison.

Abortion is a reality in Ireland as it is in Britain and Europe; the only difference is that most Irish abortions don’t actually happen on the island of Ireland.

It is time to end the hypocrisy and the discrimination. We need a 2016 referendum to repeal the eighth amendment to protect and respect women’s lives, health and choices.

The Irish political establishment schooled in the politics of deflection and hypocrisy will not easily concede to our demands.

This is why we need to increase the pressure on the politicians forcing them to act.

To that end this year’s Abortion Rights Campaign annual March for Choice on Saturday September 24 will be more important than ever. Make sure you, your friends, family and colleagues are there.

Sinead Kennedy is a pro-choice activist with Action for Choice and secretary of the Coalition to Repeal the Eighth Amendment.  Follow Sinéad on Twitter: @sineadmkennedy

Anything Good In The Connacht Tribune?

16 thoughts on “Not Going Away”