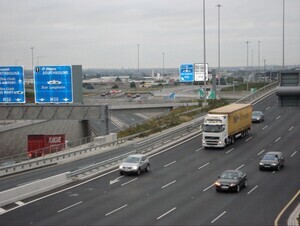 Excluding construction, only 6,700 jobs were created outside Dublin in the last year.

Some commentators have recently challenged the assertion that there is no recovery outside Dublin.

Dan O’Brien does up the numbers and show, with the exception of the West and recently the Mid-East, jobs growth has been robust outside Dublin. Stephen Kinsella made a similar point in a recent Sunday Business Post article.

What they point out is correct.

However, I want to look under the hood and see in what sectors jobs are being created.

In this post I will focus on the market economy. This is essentially the private sector which contains almost all traded sectors (that is, almost all sectors that trade internationally).

This excludes non-market sectors: public administration, education, health, arts/leisure and the agricultural sector. These are called non-market because of their high reliance on public sector activity or public subsidies. There are few traded goods and services in this sector.

What is the breakdown between Dublin and outside Dublin when it comes to the market economy?

Let’s first look at the total economy – both market and non-market sectors.

Over the last four years there has been more job creation outside Dublin than in the capital city (though we have to remember that the CSO undertook an adjustment in their sampling base which saw agricultural employment adjusted upwards significantly, though it didn’t necessarily rise in the economy).

In the last year, however, Dublin has benefitted from most of the job creation in the state – 57 percent of the jobs created were in Dublin. 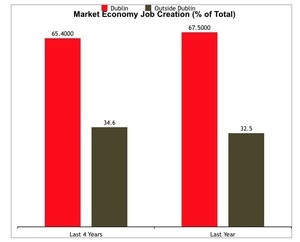 When we turn to the market economy, however, a different story emerges.

Whether in the last four years or the last year, Dublin has generated approximately two-thirds of jobs in the market economy.

Outside Dublin, even though 70 percent of the total labour force resides there, only a third of jobs were generated. That is a severe imbalance.

Let’s drill down one more time and examine the amount of job creation excluding construction. This is not to suggest that construction isn’t an important sector; and after the hit this sector took in the recession there will be a rise as the recovery sets in.

But over-reliance on construction, as we know to our cost, is unhealthy.

At the height of the boom – 2007 – construction employment made up 13 percent of all market economy employment in Dublin; outside Dublin it made up over 21 percent. 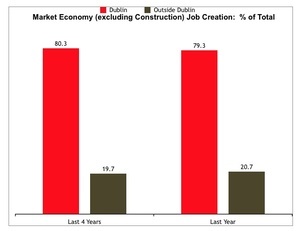 When we exclude construction, Dublin has generated 80 percent of jobs in the market economy – leaving the rest of the country well behind.

Let’s put an actual number on this. In the last year only 6,700 jobs were created outside Dublin in the market economy when we exclude construction. Let’s run through the sectors this includes:

In all these sectors only 6,700 jobs were created outside Dublin last year. That’s not a great trend even if it is heading upwards in the last year.

And this is outside Dublin – not an urban/rural divide.

Outside Dublin there are large urban areas such as Cork and Galway and substantial city/towns such as Drogheda and Wexford.

We don’t have the data available to breakdown how much job creation is occurring in strictly rural areas but it is reasonable to assume that it is proportionally lower than larger cities and towns.

In other words, we may be seeing an actual decline in the rural areas leading to higher unemployment, emigration (internal and foreign) or withdrawal from the labour force. This, combined with an ageing population and lower birth rates, could spell trouble for large swathes of the country.

None of this is surprising. Market-led job creation will see a trend towards urbanisation as capital and labour are drawn to clusters (IFSC and digital companies) and areas of better infrastructure such as telecommunications.

If the Government is serious about a rural or regional strategy it will have to mobilise capital and enterprise activity through public sector mechanisms, which is not the same as the public sector.

There is only so long an area or region can rely on non-market services and construction.

However, if the Government relies on grants and tax incentives and ‘enterprise zones’, to grow rural economies they will be disappointed; the problem is that there is less and less capital to incentivise in these areas.

We will continue to see many areas outside Dublin lag the capital city and other major urban areas.

And this will be costly affair – both in terms of public resources; but most of all, the large scale squandering of national and regional assets.

32 thoughts on “The Red Cow Divide”