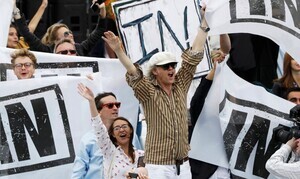 UPDATED WITH THEME TUNE: The state of British politics summed up in a clip of a flotilla face-off pic.twitter.com/wK9PKylmJN

The two camps in the EU referendum battle met today in a bizarre clash on the Thames on board a propaganda flotilla.

Sir Bob Geldof boarded a boat on the Thames to oppose Nigel Farage’s pro-Brexit flotilla, which was making its way up the Thames towards parliament.

The flotilla, of up to 35 boats, had been organised by Scottish skippers as part of the Fishing for Leave campaign.

The Boomtown rats star blasted out songs including Chicago’s “If you leave me now”, while the Leave boats retaliated by firing water from a hose at Geldof’s vessel.

Pic via Guardian and video via Mikey Smith and Kaya Burgess

I’m under aural attack from Bob Geldof who has the loudest soundsystem known to man and is haranguing Farage. pic.twitter.com/fNfojKs3AK

I’m under aural attack from Bob Geldof who has the loudest soundsystem known to man and is haranguing Farage.

Can You Vote In Brexit Referendum?