Went downstairs there and my wee girl pointed at the TV said “that man looks terrible. Does he have Coronavirus”

“No” I said. That’s Bob Geldof. He always looks like that”

Bob Geldof said he doesn’t have the coronavirus but will self-isolate anyway apart from a pre-planned family gathering.

What a complete character.

Wow. Media covering the Coronavirus. Propaganda at its finest. pic.twitter.com/8AueSWaEGx

From top: Bob Geldof at the National Library of Ireland in 2017 when, as Chairman of the Band Aid Trust, he handed over the trust’s archive to the library; video explaining Mauritius Leaks

Among those under the spotlight is a hedge fund led by Bob Geldof.

Bob Geldof’s firm wanted to buy a chicken farm in Uganda, one of the poorest countries on earth.

But first, an errand.

After soaring to fame in the 1980s for organising Live Aid and other anti-famine efforts, the former Boomtown Rats rocker had shifted to the high-powered world of international finance.

He founded a U.K.-based private equity firm that aimed to generate a 20% return by buying stakes in African businesses, according to a memorandum from an investor.

The fund’s investments would all be on the African continent.

Yet its London-based legal advisers asked that one of its headquarters be set up more than 2,000 miles away on Mauritius, according to a new trove of leaked documents.

The tiny Indian Ocean island has become a destination for the rich and powerful to avoid taxes with discretion and a financial powerhouse in its own right.

One of the discussion points in the firm’s decision: “tax reasons,” according to the email sent from London lawyers to Mauritius. 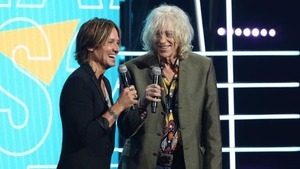 Bob Geldof does his ‘thing’ at the Australian Music Awards.

A pre-recorded interview by host Ryan Tubridy with Bob Geldof will be broadcast, in which the campaigner will explain why he returned his Freedom of Dublin award to Dublin City Council last year – in protest at Aung San Suu Kyi’s inclusion as a recipient of the award.

From the interview, Mr Geldof said:

“Burning people alive, raping women as they held their babies and in front of the women when they finished raping them, they burned the babies alive. That’s a fact and it is on film. I don’t want to be associated with this pig once.”

Bob Geldof and Minister for Culture, Heritage and the Gaeltacht Josepha Madigan (top) as the Band Aid Trust hands over their archive to the National Library of Ireland’s  Dr. Sandra Collins and Paul Shovlin (above).

Are we grateful enough?

Bob Geldof holds his Freedom of the City of Dublin award before giving it back.

Mr Geldof said he does not want to be associated with the award while it is also held by Aung San Suu Kyi.

He explained his reasons to RTE’s Sean O’Rourke this morning, saying:

“Someone who is, at best, a handmaiden to genocide and an accomplice to murder.

“And I know that sounds grandstanding but forgive me if that’s the case. I don’t actually want to do this because, as I said, I’m very proud of that specific award.

“But I was over, last night, I introduced Samantha Power, at the Abbey and she was Obama’s ambassador to the UN and she wrote the bible on genocide in her book which is Genocide and US Policy.

“I’m also a founding patron of a thing called the Aegis Trust who deal with genocide prevention and genocide studies and they built the National Holocaust Museum in the UK and, on the first national Holocaust Memorial Day in Britain, I spoke at Westminster.

“But, even beyond that, when Aung San Suu Kyi was lauded by Dublin, when she arrived and this city extravagantly welcomed her, I sang welcome and spoke welcomely. They asked me to make a speech to her on the stage [inaudible] theatre when she was there and you feel duped.

“You know? I mean, that’s personally, you feel a chump, like you’ve been taken for a ride. Now that seems very petty in the face of 600,000 people being bombed out of their strewed homes, mass rape, killing of the males and being forced to cross impenetrable borders to another country.

“It seems very petty but, it’s all I can do…

“…She’s now a pariah, nobody’s touched her. I spoke at length with Amnesty, with the head of Amnesty about this and would it in any way help. He just returned, literally just returned a week ago from there and he said: you’ve got to do it, Bob, because it’s just appalling.

“I spoke to this in Bogota in Columbia three weeks ago or four weeks, or whatever it was, I had to do something there, and I spoke to it. So it’s not as if this came out of the blue.

Earlier: Take It Back 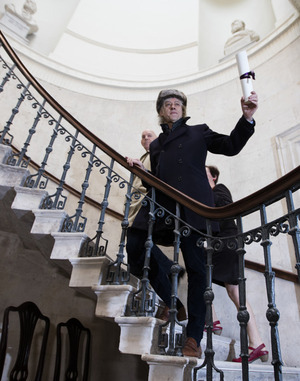 Bob Geldof receiving the freedom of the city of Dublin at a ceremony at the Mansion House in March , 2006; Aung San Suu Kyi pictured with a portrait gift presented to her at an Amnesty International event in her honour at Grand Canal Square in Dublin, 20012

On the other hand Brentwood, you are wearing wall to wall f*****g Primark.