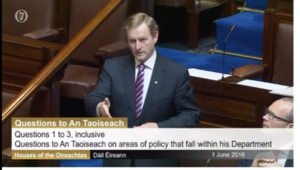 Ireland’s abortion regime is a kind of a fiction. It can only exist if its proponents resolutely refuse to see, overwriting fact with fairy stories.

Our laws effectively make the “unborn” a citizen from the moment of implantation, thus requiring an act of creativity to furnish the embryo with thoughts and feelings, or perhaps, dependent on one’s religious proclivities, an ideologically convenient soul.

Our fictions proclaim Ireland abortion free, when it has approximately the same abortion rates as other EU countries. We just like to torture the women a bit first: for moral reasons, you understand.

…We can expect of Kenny’s convention, in short, the same kind of “balance” we have come to expect of our national broadcaster: the kind that considers the issue of whether women should have human rights to have two equally reasonable sides; the kind that gives serious consideration to people who actively campaign to subject women to cruel and degrading treatment and calls this – incredibly – “fairness”.

This impartiality is also a fiction.

Emer O’Toole: What can we expect of Enda Kenny’s abortion convention? (Irish Times)

‘It Is Right To Be Angry In The Face Of Injustice’