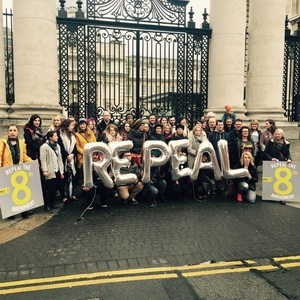 Pro-choice activists outside Government Buildings in April, calling for a repeal of the eighth amendment, in a protest organised by Amnesty International

It is sad to hear of the recent dissolution of the Amnesty International group in Kells, Co Meath.

For 30 years it has served the worthy objectives of this worldwide organisation – supporting prisoners of conscience, opposing torture, the death penalty and helping refugees.

The decision to end this valuable Irish group took place on a point of moral principle, Amnesty’s recent crusade for abortion rights. This detracts from focusing on the causes for which Amnesty was originally founded.

Moreover, seeking further extensive abortion “rights” certainly would not have been entertained by Amnesty’s founder, Peter Benenson. Perhaps the Kells group’s objection and the consequent ending of its local Amnesty International activities may now be copied elsewhere in Ireland.

Previously: It Takes A Vigil

A Deliberate Denial Of Care