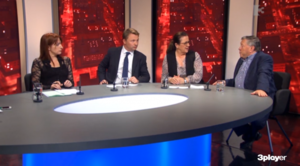 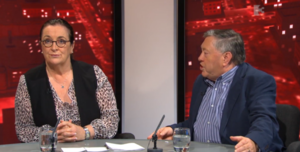 Given the publication of the Chilcot report, the panel talked about the US Army’s use of Shannon Airport.

Eoin O’Murchu: “In our case, the position taken by our, not just Bertie Ahern, but the entire Government, was that we want it to be, in our interest, to be on good relations with the United States. Shannon benefits economically, financially and so on. Very hard to find a politician, in the Shannon area, who will come out and criticise what’s being done. So, all of these things were done because of this sense: we had to make sure we were on America’s good side in relation to it. The fact that then makes us complicit, in the things that are done – because we know that war material, as well as people actually going out to fight, have been facilitated going through Shannon. We also know though none of the planes have been searched, that planes that have been used for rendition purposes, that is the taking of people for torture…”

Vincent Browne: “The abduction of people on the streets of Greece or of Italy or whatever and taking them to far off, far-flung torture chambers in Algeria or whatever and that’s what happened and it’s likely that a lot of those passed through Ireland.”

O’Murchu: “Well we know that the planes did because the planes have been identified and they’ve actually been seen going through Shannon. Now that then raises the question, for all of us in this country: if we say quite rightly, look at what happened in Iraq and the dreadful destruction that has flowed from it, the emergence of ISIS being one of them, the thousands, hundreds of thousands of people who’ve died, we have to share some of the responsibility for that because we’ve allowed that to happen. And the Government still refuses to officially even search planes and we rely upon our TDs to brave the fences and actually go in and search them…”

Marie Louise O’Donnell: “Can I ask you a question: who invaded Iraq?”

O’Murchu: “The United States and Britain.”

Browne: “Along with a number of other countries…”

O’Murchu: “But we facilitated the movement of troops…”

Browne: “What’s that penetrative question about?”

O’Donnell: “What level of the blame game are we playing here?

O’Murchu: “We are responsible for allowing the movement of men and material through Shannon Airport. That is our contribution to that war effort. And it’s something that we should be ashamed of.”

Browne: “The point I’m making is that we were complicit in an act that we deemed illegal.”

O’Donnell: “Well we had a prime minister called Tony Blair who didn’t even listen to the Security Council.”

Browne: “We didn’t have a prime minister…”

O’Donnell: “No, there was a prime minister called Tony Blair who didn’t even listen to the Security Council who told him: no, we’re going to monitor things, we’re going to continue to investigate what’s going on in Iraq. But he didn’t listen to anybody. He didn’t listen to anybody except to a kind of jockeying George Bush and they looked, the two of them, getting in and out of cars, swaggering around the place, messianic you’re right… I’m not missing the point. I’m…”

Browne: “You’re objecting to them getting in and out of cars?”

O’Donnell: “No but the way they were carrying on, like kind of modern-day cowboys, ‘we’re gonna get him’.”

Browne: “In the way they got in and out of cars.”

O’Murchu: “If George Bush had not decided to go to war, Tony Blair wouldn’t have gone to war either.”

O’Donnell: “I’m not disputing that..”

Browne: “I don’t think so, I think if you ask the Irish people and we’ll get texts I’m sure, they preponderance of social media comments on what we’re saying will be anti what we’re saying…”

Hamilton: “That Bertie did not run this country?”

Browne: “No, that they don’t care that the important issue is that we don’t alienate America and we don’t diminish the chances of further Foreign Direct Investment from America into Ireland which provides jobs. And the attitude would be: yes we could take a principle stand and we’d feel better about it but it would make no difference to what happened in Iraq.”

Browne: “Who said that we were?”

O’Donnell: “You’re carrying on as if, our, the fact that there were troops refuelling, if they were, in Shannon, that we are equally to blame as two massive warmongerers desecrated their own country and in Iraq. I think that’s ridiculous.”

Hamilton: “We’re having the argument about Shannon that has been going on since that decision was taken: that’s 13 years and nobody is saying: why did that decision happen? And why has the elected parliament of this country..”

Browne: “What do you mean nobody is saying ‘why’?”

Browne: “We know how. We don’t ask questions, the answers to which we already know..”

Hamilton: “But what we’re not asking is why was our system of Government set up in such a way as to allow, what you are saying, was effectively an illegal decision? Nobody is asking how do we prevent this happening in the future?”

Hamilton: “They should have been given the chance to debate it.”

Hamilton: “Then we would know. And we should be debating it again. That’s what the parliament is for..”

Daly: “It is a fact that record numbers of people protested in unbelievable numbers in Ireland and in Britain and globally against his war. So ordinary people’s instinct was completely against it.”

Previously: ‘A Former US Marine Will Show Ireland Has Breached International Law In Shannon’

“There Was A Deal Done Already”

14 thoughts on “‘We Didn’t Go Into Iraq With Kalashnikovs’”