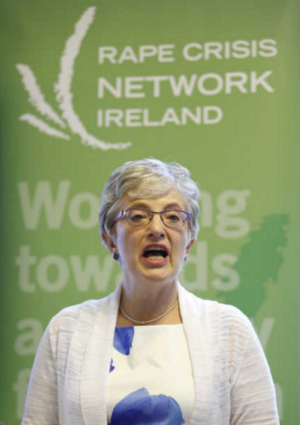 Minister for Children Katherine Zappone spoke to Audrey Carville on RTÉ’s News At One today.

It followed Ms Zappone launching the Rape Crisis Network of Ireland’s report on the sexual violence in the LGBT community.

The report was carried out by the RCNI with Gay Switchboard Ireland and the Gay & Lesbian Equality Network (GLEN).

After discussing the findings of the report, Ms Carville raised the defeat of Independents 4 Change TD Mick Wallace’s bill…

During the interview, Ms Zappone said:

“…What I find is, in my work both going around the country and also in working with frontline agencies, such as the Rape Crisis Network represents, is that people want to talk to me about childcare, child homelessness, repealing the 8th – those are the issues that they’re concerned about and they’re looking to Government to do something about. Those are the issues on the minds and hearts of our people.”

“I have been an advocate, as a feminist really, for the past 30 years to change the constitution with regard to abortion. I think we live in a country where there’s way too much restriction on the legislation for women to access, in times of certain circumstances what they require when they are pregnant.”

“Having said that, I did study the bill, very carefully. Obviously, I listened to and accepted the advice of the Attorney General, I talked to other legal advisors, I talked to medical professionals and concluded that it actually wouldn’t bring about the desired effect of the authors of the bill.”

“So I expect probably, if I had been in Opposition, I would have voted against it as well.”

“My primary objective is that we would get some constitutional change in relation to the 8th amendment. I think to call one [a referendum] now – I’m not convinced yet that enough people are with us, especially those who are still to be persuaded, part of middle Ireland, to say yes, they agree finally that there are various circumstances where women do, in very difficult circumstances, do the best and the most correct and ethical action to choose abortion or to terminate their pregnancy.”

“So I’m not convinced that our people are ready to pass that referendum and we need more time and I think the process of a Citizens’ Assembly is the best way to move in that direction.”

Previously: A Matter Of Conscience