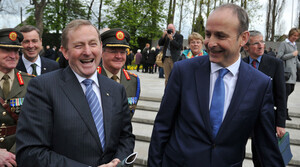 “The answer is, mate – because I wanna do you slowly…”

This was Australian Prime Minister Paul Keating’s 1992 acerbic put down to the opposition leader John Hewson’s claim that Keating, who had just become PM a few months earlier, was shying away from facing him in an early general election.

Though the positions are somewhat reversed here, and our own dear Michéal Martin would never be uncouth as the great Keating, there is a slight hint of the same approach, though it is Fine Gael doing Fine Gael.

During the very brief course of the even briefer heave against Enda Kenny, unnamed Fine Gael back bench TDs were confiding to the army of Leinster House political correspondents how fearful they were that Martin and his newly engorged phalanx of Fianna Fáilers would quickly pull down the Government and plunge the country into a snap general election from which, they reasoned, Fianna Fáil would emerge even bigger and stronger.

If this is the level of their insight, then it is easy to understand why Enda Kenny didn’t select these back benchers for high, medium or even low office.

The threat to those seats does not come from gridlock, lost Dáil votes or delayed decisions. The threat does not even come from Enda Kenny’s leadership, though it is tempting to add the word ‘alone’ there.

The threat comes, instead, from Fine Gael’s failure to grasp that its recent losses were not just part of the ups and downs of the Irish political cycle, but rather because it failed to realise that politics has changed and that the voters have changed.

In 2011 Fine Gael styled itself as the party of political reform. It was going to change the way politics was done forever, it was going to end the Punch and Judy dynamic and show cronyism the door.

Its support levels rose to the heights it had reached under Garret Fitzgerald on the back of that promise of reform.

But, just like Garret’s crusade, it proved to be all spin and precious little action.

Instead of trying to aim for real reform Fine Gael looked backwards and determined that strong government is good government and that people would think that too if you told them it enough times.

It didn’t even grasp the basic rule of coalitions that the majority partner needs to give the junior partner, particularly its back benchers, sufficient space to exert its own identity – though they were, in fairness, aided and abetted in this by some Labour Ministers.

The irony of Fine Gael’s current predicament is that it is now operating in a system of ‘new politics’, but it is one that it did not design or propose. It is a ‘new politics’ primarily engineered by Fianna Fail and foisted upon the Government by Dáil arithmetic.

It is a ‘new politics’ that is still being talked about, but is not yet truly up and running.

The two key organisational elements of it, a committee system that is not an arm of government, in which every TD’s voice matters and a budgetary system that includes full oversight and scrutiny will not ready to properly start working until after the Summer recess.

Though there will doubtless be teething problems and institutional resistance to both, the success or failure of ‘new politics’ is predicated on these working properly over time.

The longer that Fine Gael, as a party, is seen to be reluctantly and unenthusiastically embracing these reforms, the longer it will prolong the pain for itself.

While its recalcitrant backbenchers may be right in identifying Enda Kenny’s leadership as part of its woes, its problems run much deeper.

They include clear identity and purpose and the longer Fine Gael delays addressing these issues the longer it allows itself to be Keating.

10 thoughts on “Killing Him Softly”