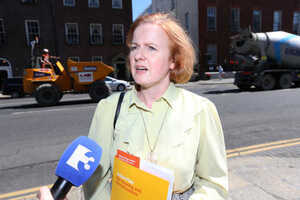 That action plan on housing.

End of local authority housing as we know it, three quarters of council land to be privatised, no challenge to EU rules and rocketing rents to remain.

What’s not to love?

The government’s Action Plan on Housing sadly repeats the failed focus on incentivising the market through increasing the profit of developers and landlords.

The market caused the crisis, now this neoliberal government turns to it to resolve it.

Given the scale of the housing emergency, the poverty of ambition is startling, considering also the much-lauded economic growth. The aim is to house only one-third of those on current lists by 2021.

Presumably the rest can just wait another 10! The figure of 47,000 ‘social houses’ is a mix of new-builds, refurbishments, acquisitions and leasing, the latter often impermanent. It falls short of even the Housing Committee target and adds on another year.

As I pointed out with the Housing Committee Report, funding and delivery is dependent on keeping within strict EU fiscal rules.

The Plan confesses that while the housing emergency has been raging, the Dept has scandalously spent two years trying to come up with a workable off-balance sheet model to do this.

If implemented, this will mark the end of local authority housing as we know it. Not alone will ‘additional social housing provision (be) a combination of building, acquiring and leasing’, but councils will not be directly funded and allowed to fully build on their own land.

They will be forced to hand over 75% of it to private developers. A new form of housing estate will be created on public lands: only 25% will be council housing and the rest private mortgages and affordable/’cost rental’ where tenants will pay up to 80% of the market rent, rather than a differential rent based on their income.

The key to resolving the housing emergency is to use council and Nama lands, for councils to directly employ labour and build on public lands on a large scale, cutting out the private developers cut (often 11-15% ) and keeping costs down.

The document is laced with stigmatising phrases about council housing, such as ghettoisation and not repeating ‘mistakes of past’.

Local authority estates can be highly successful if well planned with facilities and open space. The income eligibility could be raised allowing more workers avail of affordable mortgages or council rents.

But there is never a concern for ‘tenure mix’ in Killiney or Malahide.

The real reason for the ‘tenure mix’ is to have a rental funding stream to achieve the neo-liberal ‘off balance sheet’ rule.

For the 6,000 people in emergency accommodation, there is little except more overpriced modular or transient housing. The emphasis is on forcing people onto HAP or private rental, potentially miles away from the family’s choice of area.

Despite the Private Rented Sector being the cause of homelessness, the government promotes it, extolling it’s virtue of supporting “a mobile labour market, as renting households may more easily pursue job opportunities.” It ignores the interests of workers and families who want to live in a fixed community.

Instead of rent controls to stop the huge hikes which are making people homeless, the Plan proposes no measures to curb profiteering on rents, it defends and promotes landlord interests by continuing the use of the private sector as a substitute for public housing, alongside introducing a new range of tax breaks to ‘incentivise’ landlords. No moratorium either on repossessions.

Rather than driving down the cost of housing to affordable levels, a ‘help to buy’ initiative for first time buyers would end up in the pockets of developers.

Michael Noonan told the Housing Committee ‘we do not have a shortage of money’. He is right. €5.4 billion is sitting in the Irish Strategic Investment Fund – the remnants of the pension reserve fund after it bailed out the banks.

But he admitted that EU fiscal rules prevent us actually spending it on public housing. It must be ‘off balance sheet ‘ and involve the private sector or be self financing. The same goes for the €2.4bn cash reserves Nama has left.

Neither do EU fiscal rules prevent taxation on wealth being used to finance housing. So, a millionaire’s tax could be introduced. The headline rate of corporation tax could be immediately imposed and increased to house our homeless.

The government could stop its opposition to Apple repaying €17 billion in back taxes to this country. There is vast untapped and untaxed wealth that could be used to fund affordable and secure home building.

Only a government that is willing to challenge and breach those rules can end our housing emergency.

Ruth Coppinger is a member of the Socialist Party and an Anti Austerity Alliance TD for Dublin West. She has occupied Nama housing with homeless families. Ruth is a member of the Housing Committee and has published her own housing Minority Report. Follow Ruth on Twitter: @ruthcoppingertd

50 thoughts on “A Manifesto For Property Developers”