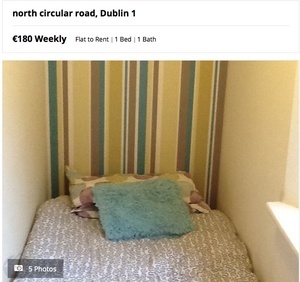 A Daft.ie ad for a one-bed flat on North Circular Road, Dublin, in May

On RTÉ Radio One’s Today with Sean O’Rourke, hosted by Keelin Shanley, RTÉ journalist Brian O’Connell spoke to a third-year female student from the west of Ireland who is studying nursing in Trinity College Dublin.

Explaining her struggle to find a place to rent, she said:

“Looking for accommodation in Dublin is like selling your soul to the devil. A lot of places are €600-plus a month and, if you’re lucky enough to find a place that’s less than that, it’s not really appropriate for living in.”

“[One place she saw was]… a double room in an apartment and, in the kitchen, the owner of the flat slept on the couch. And you weren’t able to lock your bedroom door because the bathroom was in the bedroom [en suite]… it was €600 a month for that one.“

Meanwhile, on that Rent A Room scheme, which is organised by UCD Students’ Union, TCD Students’ Union and Daft.ie and where homeowners can earn up to €12,000 a year tax free by renting out a room to students, Mr O’Connell said:

“There is an issue that students have been highlighting with me and it was that, if the room is not self-contained, for example, if it’s not a separate bedsit or a converted garage say, then you have very few rights as a tenant. You’re not covered by tenant legislation, if you simply rent a room in someone’s home. 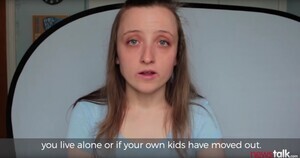 Or not to dig.