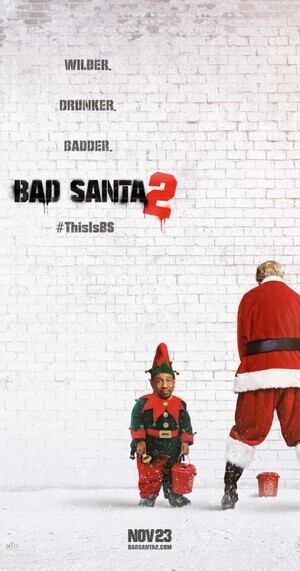 1. Billy Bob Thornton – Actor, filmmaker, singer-songwriter, epic haircut in Fargo, six times married*. ..This man works harder than Miriam O’Callaghan’s child minder and here he is back as Willie in Bad Santa 2, The sequel to 2003’s dark and cynical yet utterly hilarious Ba…. Well you’ve probably already guessed what it’s a sequel to.

2 Alongside Elf (2003) and the same year’s Love Actually (yeah Love Actually, I said it, I love Hugh Grant, I’m a fool to myself) Bad Santa is one of the great Christmas movies imho And the storyline this time sees him reunite with his sidekick Marcus (Tony Cox), to knock off a Chicago charity on Christmas Eve.

5. The movie seems to have had a troubled production as it’s been in development since 2009 however as an eternal optimist I’d like to think they’ve just been working hard to perfect their craft rather than the more likely awful alternative.

6. It’s directed by Mark Waters, the director of Mean Girls (think Broadsheet comments section with American accents) who surprisingly didn’t have to hand back his director’s badge after 2014’s Vampire Academy.

7. Sadly there’ll be no Bernie Mac this time round as he’s deader than the plants in Pat Hickey’s holiday home, but on a brighter note they have drafted in Christina Hendricks,
and Oscar winner Kathy Bates also stars as Thornton’s mother, despite being only
Seven years older than him in real life.

Bertie’s verdict: If it’s half as good as the first one it will pass a couple of hours pleasantly enough.