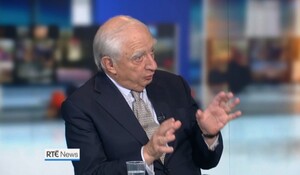 They started off speaking about the makeshift refugee camp in Calais, following a news item about a protest having taken place there yesterday – with some locals and truck drivers calling for it to be closed down.

Mr Sutherland talked about how he had been there, how it is appalling and how 70 additional people arrive in Calais every day.

He then talked about the EU response, as a whole, to those seeking refuge in Europe and highlighted the problems a fragmented approach with different countries doing different things.

He called on EU countries to act with more solidarity in mind.

Peter Sutherland: “Basically, the British are saying ‘yes, all of those who are in Calais want to get into the United Kingdom but they’re the responsibility of the French because they’re in France and we won’t allow them into Britain, so the French are going to have to deal with this. This creates obviously some tension but it also creates an enormous problem in Calais where people are constantly trying to get on lorries or on trains and it’s very dangerous and many of them are children.”

Bryan Dobson: “Does that, in a sense if you like, encapsulate the way this has been responded to by Europe, that individual states have been passing the buck?”

Sutherland: “Absolutely, and the greatest evidence of that is in the Mediterranean frontline states – Greece and Italy are taking all of the refugees. Everybody leaving Libya, virtually, is delivered, including by our Navy and the British Navy and the Germans to Italy and they are left with this huge number, growing number of refugees and I think this is grossly unfair. The same can be said for Greece.”

Dobson: “But, of course, what happened, the German chancellor Angela Merkel opened up the border, the German borders to invite people in, in this extraordinary gesture last year is that, politically, she’s facing a backlash now, isn’t she? And her political future is in question because the hostility of very many German people just to that policy.”

Sutherland: “It is, absolutely, but in my view she’s a heroine. She’s done something that others have not been prepared to do and virtually all the central and European countries are saying ‘absolutely no’ to refugees. Surely, if we are a community, a European Union, based with a concept of solidarity, we should share and we should share on a logical basis all the refugees.”

Mr Sutherland then went on to say Ireland should ‘do more’ and invite ‘thousands’ to Ireland.

And was asked about the Apple tax ruling.

Dobson: “The Government, you believe, have made the right decision when it decided to appeal?”

Sutherland: “Unquestionably, there was no decision that could be taken, other than to appeal. Otherwise it would be accepting an adjudication which, as I understand it, the Government absolutely contests. I mean the Government’s case appears to be that the Revenue Commissioners, not the Government made the decision on the application of the law in regard to taxation which would be applicable to everybody. It wasn’t a special deal. Now, if that is correct, it seems to me that that is not a state aid.”

Dobson: “Do you think Apple have paid their fair share of tax to whomever it’s due – Ireland, United States, other European countries?”

Sutherland: “I can’t comment on that, I mean what is a fair amount of tax? It seems a ridiculously large sum to have avoided, I don’t know. I’ve no idea, I’ve seen no papers.”