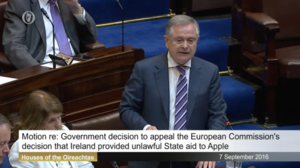 Labour’s Brendan Howlin in the Dáil during the debate on the Apple tax ruling.

“There seems to be a belief that Ireland, a small nation, should carry the reputational hit for correcting what is an issue – and that we’ve all agreed is an issue – we’re told this is an investigation under state aid rules yet the lion’s share of the commentary seems to be the announcement of the commission’s position has been about taxation levels.

“The same sort of commentary we heard for many, many years about corporation tax policy in Ireland.”

“It’s a dishonest charge levelled against us and all it seeks is to do us harm. And those who would be complicit in it do Ireland harm and the prospect of continuing, to be the success we have in attracting investment into this country.”

“But it is the mud that sticks, the mud that is thrown often enough. The truth is that this State collects higher than average revenue from corporation taxes.

“It implements, at a national level, an effective tax rate higher than other countries with bigger systems of relief that don’t seem to be the focus of the commission’s overview. A point made I think, rather effectively, in the case of France, by Deputy [Michael] Martin.”

“As Dan O’Brien and other commentators have pointed out, there’s a growing trend in the European Commission rulings to find against smaller countries but ignoring potential breaches elsewhere. That should give every member of this house pause for thought before automatically rushing to agree with the commission.”

The Steve Jobs Action Figure You May Never Own 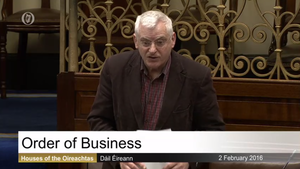 46 thoughts on “‘It’s A Dishonest Charge Levelled Against Us’”