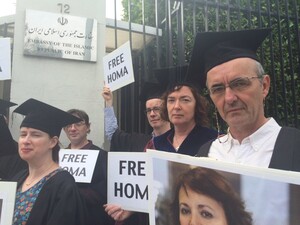 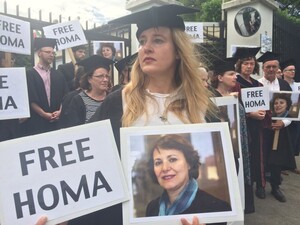 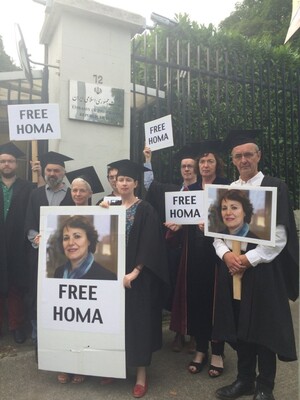 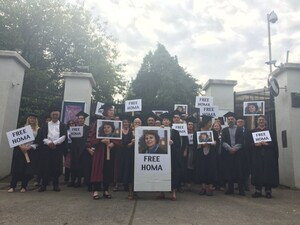 Outside the Iranian embassy at Mount Merrion Avenue in Blackrock, Dublin.

A group of academics from Dublin’s major universities gather in full academic garb, to call for the release of anthropologist and Irish citizen Homa Hoodfar from prison in Tehran and to highlight what they claim is the Irish government’s lack of action.

Homa has been in prison in Tehran for the past three months and, a week ago, her family and friends received the news that she has been hospitalised.

In a piece recently published in The Guardian, Tariq Ramadan wrote:

As a Muslim scholar, I am deeply troubled by the unlawful and unjust detention of professor Homa Hoodfar, an Iranian-Canadian scholar who was detained in March while visiting friends and family in Iran. Members of the Revolutionary Guard raided her home, confiscated her personal belongings and passports, summoned her for interrogations, and finally imprisoned her in Tehran’s Evin prison without access to her family or a lawyer.

Her treatment violates principles of intellectual freedom, justice and fairness that are central to the Islamic system of morality.

Born in Iran and now a Canadian and Irish citizen, Hoodfar is a senior anthropologist who has devoted her academic career to studying the family as well as the duties and rights of women in various Muslim contexts.

A renowned scholar, she has taught at Concordia University in Montreal for the past three decades. Her research on Muslim women’s struggles – both in the Middle East and in the west – is balanced and characterised by respect for those about whom she writes.

Her extensive work on Muslim women living in the west and their veiling strategies has been a particularly important contribution to challenging colonial images of the Muslim veil, while at the same time helping to address Islamophobia in the west.

Since she is neither a political activist nor part of any political movement opposing the government of Iran, she never hesitated to visit the Islamic republic to see family or conduct historical research.

While Tehran’s prosecutor recently announced indictments against Hoodfar – along with several other dual nationals – the charges she faces remain unknown. Semi-official reports in newspapers with links to the Revolutionary Guard, however, accuse her of “dabbling in feminism” and fomenting a feminist “soft revolution” against the Islamic republic.

Hoodfar’s treatment demonstrates the extent to which her work has been misunderstood by the Iranian authorities. Her research poses no threat to Iran’s government or its people, and her arrest is deeply disturbing for anyone who values academic freedom and independent scholarship.

The detention of Homa Hoodfar is unjust and unIslamic. Iran should release her (The Guardian)

44 thoughts on “Meanwhile, In Blackrock”