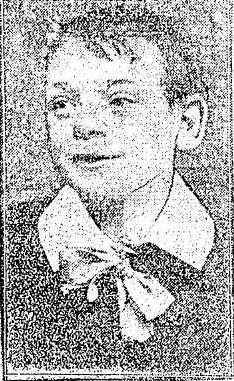 Did you know about ‘Dublin’s Newsboy Millionaire’?

Young Luke Flanagan (no relation), summoned before the Dublin Children’s Court on February 8, 1911 looked just like any other Dublin tenement boy – undersized – looking 4 years younger than his actual 15 years.

Without a shirt and with a threadbare coat pinned across his chest, his crime was also typical of many tenement boys – that of selling newspapers without a licence.

But Luke differed from the average such boy in one important respect.

According to Police Constable 86C (one of Dublin’s famous Tall Constables), who had summoned him to court, he was generally known as the ‘Dublin Millionaire Newsboy’, having inherited a large sum of money from a relative in Canada, which he would come into when he reached the age of 21 years.

Giving evidence in court, Luke’s mother, Mrs Rooney, said that she had married Frank Flanagan, the son of a Dublin solicitor who had subsequently emigrated to Canada. Frank was now dead, and she had remarried.

Luke, their only surviving child, lived with his mother, her new husband, and a ‘foster brother’, also a newsboy, in a tenement flat off O’Connell Street.

Some years before, her deceased brother-in-law, John, who had gone to Canada with his father, returned bringing news of Luke’s grandfather’s death, and a legacy of £1500 (a substantial sum in 1911) left to Frank and passing to Luke as his surviving heir.

The question was, where was the money?

Mrs Rooney – described by all sources as a woman of excellent character – thought perhaps it might have been paid into the Court of Chancery in Ireland.

This caused consternation among Dublin citizens, who were outraged at the thought of a young man of such expectant fortune – described by one paper as a thin, weakly youngster with a wistful face – being neglected by the Court and left to fend for himself on the streets of Dublin.

British newspapers took up the cry of outrage, and soon the story spread as far as Canada itself, and San Diego, Texas. In fact, Luke’s was perhaps the first Irish news story to go viral.

Matters quietened down however, when the Irish Court of Chancery released a statement saying that no money had ever been lodged with it on behalf of either Luke Flanagan or his grandfather’s estate.

Luke Flanagan was convicted of trading without a licence and obliged to pay 2s 6d to the poor box. It is not clear whether he ever got his legacy.

Was the Court of Chancery being entirely honest? Did wicked Uncle John make off with the money? What happened to Luke’s newspaper business in the Rising of 1916?

The Girl In The Poster

15 thoughts on “A Paper ‘Millionaire’”