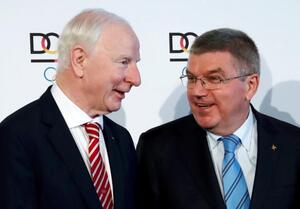 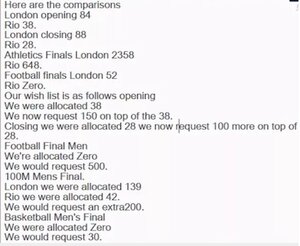 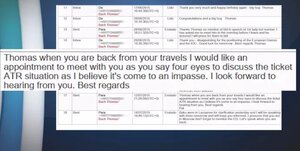 Emails (above) from Pat Hickey (top left), who has stepped aside of his role as president of Olympic Council of Ireland, to president of the International Olympic Committee Thomas Bach (above right)

Brazil’s Globo News has obtained a copy of an email in which Hickey gives Thomas Bach a comparison of the ticket allocations received by the Olympic Council of Ireland (OCI) for the London 2012 and Rio 2016 Games. Hickey states that the OCI received 84 tickets for the opening ceremony in London but only 38 for Rio.

“We found enough evidence linking Hickey to this plot to sell tickets by a company that was not authorised,” prosecutor Marcos Kac told the Associated Press. “These are tickets that were sold for up to $8,000 [about £6,000].”

…Police have said that he plotted with businessmen to transfer tickets illegally from Pro 10, a sports company, to hospitality provider THG Sports, which was a non-authorised vendor and allegedly sold them for high fees. Police investigators said that the scheme was planned to bring in $3 million.

IOC chief absent after link to ticket scam (The Times)

Further to this, Mr Ziegler tweetz:

Re: Hickey’s ticket request to Bach, why would Olympic Council of Ireland want 500 tickets to the football final (Ireland not in tourament)?

Up All Night To Get Unlucky