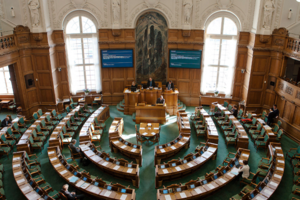 Inside the Danish parliament Christianborg Palace in Copenhagen, Denmark

Luke Harding, in The Guardian, reports:

Denmark has become the first country in the world to apparently buy data from the Panama Papers leak, and now plans to investigate whether 500-600 Danes who feature in the offshore archive may have evaded tax.

Denmark’s tax minister, Karsten Lauritzen, said he will pay up to DKK9m (£1m) for the information, which comes from the Panamanian law firm Mossack Fonseca. He said an anonymous source approached the Danish government over the summer.

The source sent over an initial sample of documents and the government reviewed them. After concluding they were genuine, it secretly negotiated support for the controversial deal from political parties in parliament, the minister said.

“Everything suggests that it is useful information. We owe it to all Danish taxpayers who faithfully pay their taxes,” Lauritzen said, admitting that he had originally been “very wary”.

All Aboard The Epic Bus

20 thoughts on “Dealing With The Rot”