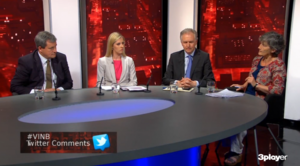 Kieran O’Donnell: “Firstly, Vincent, America is made up of 50 states, right? So I see that as one..”

O’Donnell: “Companies have, in the main, pay federal tax, right? So I don’t buy the argument. Europe is made up of distinct countries with their separate tax laws, right? That’s number one. And I think that, number two, the Revenue Commissioners have operated independently of Government…they operate independently of Government and I think that’s why we have a situation whereby that, if Government ministers were aware of every ruling with or with the opinion given by Revenue Commissioners, people would say that’s interference, you can’t have it both ways, so, effectively we have a separation…”

Connolly: “You do. You want to be part…”

Lisa Chambers: “Catherine, is this a state aid matter or is it a taxation matter? State aid should not encroach on taxation matters and it is a fundamental principle..”

Vincent Browne: “I would say the opposite..”

Chambers: “It is a fundamental principle of taxation law that it should not apply retrospectively. This is going back 25 years. 25 years.”

Browne: “This is quite wrong.”

Connolly: “That’s not accurate, the second thing is, we’re a part of Europe, ye have endorsed Europe, you’ve endorsed the Commission and their rules and now that it doesn’t suit you…”

Chambers: “But if one of the rules that… a country defines its own taxation law…”

Connolly: “One of the basic rules is you cannot give state aid selectively and that’s the crux here, on top of the other crux…”

Chambers: “But it’s a taxation matter…”

Chambers: “It is not state aid, I’m sorry, it’s incorrect.”

Connolly: “The commission is saying that you treated Apple selectively. You gave them special treatment, compared with other companies. You’re saying ‘no we didn’t’.”

Chambers: “But why are you backing the commission and not your own country?”

Connolly: “I’m not backing anything. I’m looking at the judgement.

The Man Who Couldn’t Keep Quiet

59 thoughts on “‘Why Are You Backing The Commission And Not Your Own Country?’”