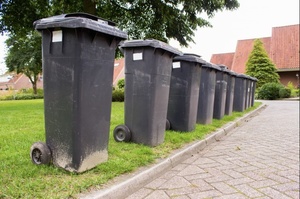 In Ireland, what’s good for Donegal is decided in Dublin.

Whenever one compares Irish government finances with that of other small open economies or Nordic countries, showing that we spend far less on public services, social protection and investment someone invariably comes back with: ‘we can’t trust our government to spend efficiently, or honestly, or at all’.

So how do the other countries do it?

There is no one answer but the following may be a contributing factor: other European countries are far more decentralised than the Irish state.

Another way of look at this is the amount that local government spending makes up.

Let’s compare ourselves with those high-spending Nordic countries.

So what do these other countries spend their money on through local government?

There are four main areas:

On average, in the Nordic countries local governments are the main financial sources for health, education and recreation & leisure. In Ireland, on the other hand, local government plays a much diminished and, in the case of health, a non-existent role.

Even in social protection, Nordic local governments play a prominent role. It should be noted that the category of social protection is not just about cash transfers; it includes in-kind benefits – home-helps to elderly and disabled, transport services, assistance with funeral services for survivors, holiday camps for children, etc.

In short, the Nordic countries are characterised by highly decentralised systems where policies and financing are provided by governmental tiers that are arguably ‘closer to the people’. In Ireland, what’s good for Donegal is decided in Dublin.

Could this decentralised structure imbue more confidence in higher spending regimes? And what implications does it have for Ireland. Well, if the answer to the first is potentially yes, the implications for Ireland are not good.

It’s too big an issue to go into here but this is just a sampler:

Why do we have four local authorities in Dublin, rather than a Greater Dublin Council? Councillors could be elected along Dail constituencies and would be full-time – part-time councillors don’t have the resources or the time to hold the managerial system to account.

There would be an Assembly with full-time staff and support services with a number of centralised functions devolved to the council level.

Another lower, part-time tier could be established through local area councils (a Swords Council, a Blanchardstown Council, an Inner City Council) with powers devolved through the Assembly.

In the rest of the country, there would need to be an upscaling of city/county councils. We used to have eight regional authorities; recent reforms have reduced to these three. Formerly it was probably too many, now it’s too few.

These are largely toothless but they could be turned into larger full-time professional councils along the lines of a Greater Dublin Council. The current structure could remain but reformed to bring about even more local democracy (a Tralee Council, Letterkenny, Drogheda, Athlone).

But all this is predicated on the willingness of the political culture to engage in a radical decentralisation and, given our historically centralised state, this would be a big task. But it’s one that progressives should investigate.

[Note: it could be argued that Ireland is too small to have a decentralised system. Yet, Iceland and Luxembourg spend more money through local government than we do.]

If people felt that such institutions – being closer to home – were more accountable, then the prospect of developing a strong social state could gain momentum. And there’s another reason.

The Left doesn’t look like taking national power anytime soon with its divisions, fragmentation and low-vote.

However, there are many areas in the country where the Left could form a majority and show that it is capable of governing.

This could set up alternative sources of power and prove useful preparation for hopefully, one day, national hegemony.

It’s not as if others haven’t noticed how weak our local government is. The Council of Europe produced a damning report on Ireland’s excessive centralisation, lack of funding transparency and limited local powers.

Isn’t it about time we noticed, too?